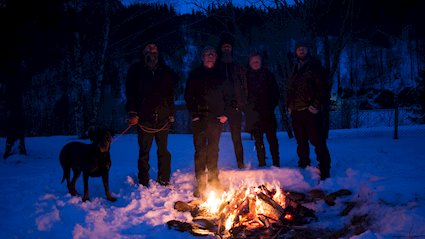 Directed by Guilherme Henriques, whose past visual collaborations with artists such as Belphegor, Wormed, and Hideous Divinity have turned many a head, ‘Endetidstegn’ presents a bleak window into a personal form of apocalypse, the inevitable demise handed down by the vengeful Gods of modern man, vice, alcohol, drugs. Containing elements of psychedelic electronica and trip hop converge over crunching guitars and haunting vocal harmonies, Manes cinematic approach to music creation evokes curiosity and a desire to discover what lays beneath.

“The title Endetidstegn is Norwegian and translates as sign (or signs) of the end times. A lot can be found right there. In many ways, it can deal with the notion of inevitability or destiny, and how some feel constricted by this – and thus how the signs of what is to come is merely registered and nothing more. As with much of what we do, this song has a somewhat conceptual framework, but is truly given definition or signification in convergence with a listener. The proverbial fist that hits you in the stomach hits even harder when formed in your own head.” – Manes
‘Slow Motion Death Sequence’ is released 24th August via Debemur Morti Productions.