Iron Maiden vs Margaret Thatcher. A look into the history of Maidens early cover art. 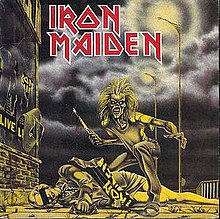 April 17th 2013 was the day that Britain laid to rest former Prime Minister, Margaret Thatcher. Some people were sad and some were joyous, whatever emotion people have felt on this day, it has caused much controversy throughout the whole of Britain. However, this not the first time that Margaret Thatcher has been killed off. Of course, I don’t mean literally, but Iron Maidens Mascot, Eddie has previously been depicted on the cover of the Single “Sanctuary“, (released on the 16th May 1980) wielding a knife, while crouching over the corpse of the then British Prime Minister who was famously known as the “Iron Maiden”.

The cover art caused controversy for the band, but in true Media form, any publicity is good publicity and the cover art resulted in Iron Maiden gaining coverage in the Daily Mirror, who ran a story about the single, as well as publishing the uncensored Artwork that was reported as being banned in Britain, however it was later claimed, that it was the bands Manager, Rod Smallwood who suggested to EMI that the cover be released with Thatcher’s face censored “as this would give the tabloids an angle and draw attention to the single.” The Daily Record also published an article, which deemed the cover “horrific” and included interviews with Young Scottish Conservatives who criticised the artwork as being “in very bad taste.”

This wasn’t the last time Iron Maiden featured Margaret Thatcher in their Artwork, she also appeared on the band’s next single, “Women in Uniform“, (released on 27th October 1980) in which she is shown seeking revenge on Eddie, clutching a sub machine gun. However, on this occasion it was the fact that Eddie was walking down the street with a Nurse and a School Girl on his arms that encouraged the “bad publicity”. According to the band, the cover was a joke following the infamous “Sanctuary” artwork, and managed to cause further controversy as, according to the Liverpool Daily Post, a group of “screaming, chanting, banner-carrying feminists” led a demonstration during Iron Maiden’s Leeds University gig in November 1980.

Ever wondered whose hands, are clutching Eddies T-Shirt, in the Artwork featured on Iron Maidens 1981 Album Killers?  You got it; it was no other than Margaret Thatcher herself.

So, as the Country continues to debate over if a state funeral should have been provided for her, at the expense of the Tax Payer. Or, whether she made the right decisions as a powerful female throughout her time in 10 Downing Street. Just think to yourselves, the “Iron Maiden” may just be waiting round the corner, armed with her Machine gun, seeking revenge.