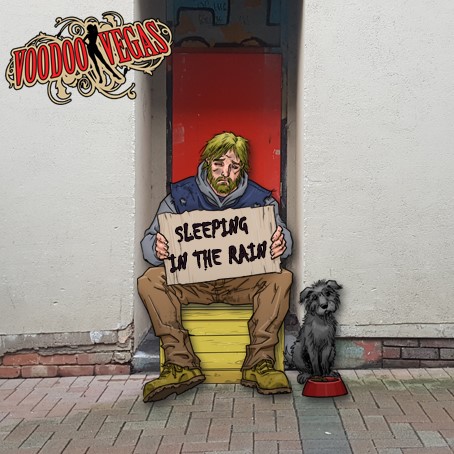 
It’s been over fifty years since Bob Dylan stood in an alley, in shades, flipping signs to flash up the lyrics to ‘Subterranean Homesick Blues’. Now, Voodoo Vegas take a new and meaningful spin on signing up lyrics in the street with their striking new video for ‘Sleeping in the Rain’. The video shows a young street homeless man, holding up a single sign, onto which the song’s powerful lyrics about what it feels like to be homeless are displayed, while people walk by, oblivious to his presence, words or plight.

It’s a poignant song, with a powerful message. Voodoo Vegas wrote it for their second album ‘Freak Show Candy Floss’ and have dedicated its release as a single to the charity Crisis, which campaigns on the issue of homelessness and directly helps those affected by it. All proceeds from ‘Sleeping in the Rain’ are going to Crisis, to support their vital work.

“ ’Sleeping in the Rain’ is a very personal song for me,” explains frontman Lawrence Case, “Playing shows in different towns and cities around the UK, I’ve noticed that many of the streets are full of rough sleepers. I’ve read a lot of articles on homelessness and often will help out rough sleepers by buying them food and trying to help them get into a shelter for the night.

“I think it really sucks how in city centres around the UK hundreds of people can walk past a homeless man/woman and not offer to buy them a drink or a sandwich or even say hello. This is where the idea for the lyrics come from.”

Lawrence discussed the song with comic artist Jason Johnson, who captured the view in his head for the distinctive look and artwork of the animated video, realised by Cloud Music Typography.

“’Freak Show Candy Floss’ is the first music written entirely with the new Voodoo Vegas line up,” Lawrence adds, “Where some bands find it hard to write their second album, Voodoo Vegas had a ton of energy going into the writing of this album and it didn’t feel like writing our second album, it felt like this was our first.”

What’s more, in 2017, Voodoo Vegas announce they will be going back out on the road with a 4 date Holland tour, with the legendary Y&T.

“Clearly a band passionate about what they are doing, and working hard to capture and convey their energy and dynamic range to a broader audience”, as Rock N’ Load put it.


For more information on the band, their releases, and tour dates, check out www.voodoovegas.com

For information on Crisis and their work fighting homelessness, see https://www.crisis.org.uk/