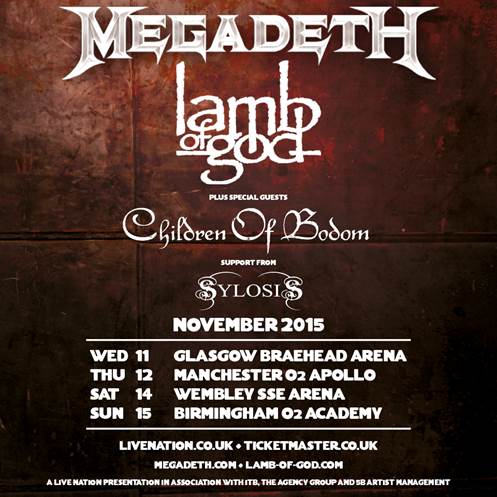 Megadeth and Lamb Of God are pleased to announce a full UK & Eire co-headline tour in November 2015. The tour will coincide with the release, later this year, of Megadeth’s 15th Studio album through Tradecraft / Universal. Lamb of God’s blistering new album ‘VII: Sturm und Drang’ will be released July 24 via Nuclear Blast Entertainment.

Formed in 1983, Megadeth are one of the true pioneers and innovators of metal music. The band have sold more than 38 million albums worldwide. The band released their 14th studio album, “Super Collider, in 2013 through Dave Mustaine’s own Tradecraft label. Megadeth have just finished recording a new studio album – due for release later in 2015. This year also marks the thirtieth anniversary of the release of their seminal debut album “Killing Is My Business…And Business Is Good”.

Dave Mustaine says, “Having just finished an amazing record full of high-energy heavy metal with Chris Adler, Kiko Loureiro and David Ellefson, I am excited to announce this tour and see all of the metal fans come out for this one. I literally can’t wait to hit the stage again!”

The tour is a co-headline with Lamb Of God.

After headlining the second stage at the Download Festival last month, Virginian metal titans LAMB OF GOD are delighted to return to the UK as co-headliners this November. Hailed by Metal Hammer as “their finest outing in a decade”, Lamb of God‘s blistering new album ‘VII: Sturm und Drang’ will be released July 24 via Nuclear Blast Entertainment. With 3 new songs already unveiled, you can now also hear new track ‘Erase This’ at: http://smarturl.it/EraseThisAudio. The band star on the front cover of Kerrang! this week. Respected longtime drummer Chris Adler recently joined the Megadeth ranks as well, so will perform with both bands each show.

“I have to say that it’s definitely exciting to be announcing this one! I’m more than pleased to let the world know that Lamb Of God will be sharing the bill with thrash metal legends, Megadeth, for five shows in the UK and Ireland, from November 9th-15th! It’s been almost a decade since we’ve had the opportunity to tour with Megadeth, and we’re absolutely thrilled to be teaming up with them once again for these very special UK dates. Also appearing will be our good friends and long time co-conspirators Children Of Bodom and Sylosis. This lineup is unstoppable! If you’re not stoked about this bill, then you very simply do not like heavy metal! Take a plane, take a boat, hitch a ride, take the tube, bring your Wellies…see you there!” – Mark Morton, Lamb Of God.

Support comes from Children Of Bodom and Sylosis.

World renowned Finnish heavy metal powerhouse Children Of Bodom are set to release their ninth studio album ‘I Worship Chaos’ worldwide on October 2, 2015 via Nuclear Blast Records.  Over the last twenty years, Finland’s Children Of Bodom have incorporated many different musical styles into their celebrated sound, leading critics and fans to label them as melodic death metal, thrash metal, symphonic black metal, and neoclassical metal. Their enthralling mix of melodic hooks and instrumental acrobatics has solidified the band as one of the leading voices of music’s new generation.

Widely hailed as “One of the UK’s finest modern metal bands” (Kerrang!) Reading 4 piece Sylosis released their 4th album “Dormant Heart” back in January 2015, which was applauded as a ‘raging and triumphant beast of an album’ by Metal Hammer. 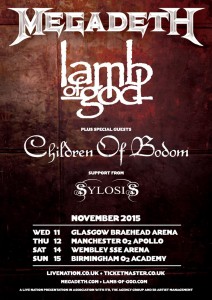