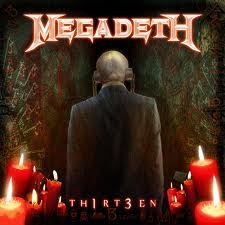 Th1rt3en (Thirteen) is the aptly named thirteenth studio album by metal gods Megadeth, the album is comprised of songs that were penned by Dave Mustaine as early as 1991! Some of the songs have either been bonus tracks on previous albums – “Black Swan” was originally released as a bonus track for members of the band’s fan club who pre-ordered United Abominations, or have been previously unreleased.

Listening to the album was like taking a tour of the history of Megadeth through the ages. Sudden Death  sounds like it came straight from the ‘Peace Sells’ and ‘So Far, So Good, So What’ era while Public Enemy Number 1 would have been well placed on the ‘Rust in Peace’ album.

Even Megadeth’s bass player extraordinaire Dave Ellefson has called the song  13 “theatrical”, and compared it to “In My Darkest Hour” from ‘So Far, So Good…So What’

And so the nostalgic time travel continues right up to present day Megadeth and the album has you wanting for more, more, MORE!!!

When Who’s Life (is it anyways) kicked in I couldn’t help but dust off the old air guitar and play that bad boy to the insane solo’s taking be back to my grotty teenage days. Not since the first time I heard ‘Rust in Peace’ and ‘Youthanasia’ have I been as excited by a Megadeth album – don’t take that the wrong way, I am a HUGE Megadeth fan but some of their later albums are not as exciting as this album.

Even though each song sounds different to the next, you can’t miss the style of playing and Dave’s angry growls that this is Megadeth, back doing what they do best…kicking your ass into next week.

The only way to sum up this album is taken from the song Sudden Death “Like a good old fashioned beating within inches of your life”. One of the best thrashings I’ve had in ages!! 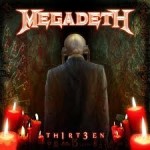