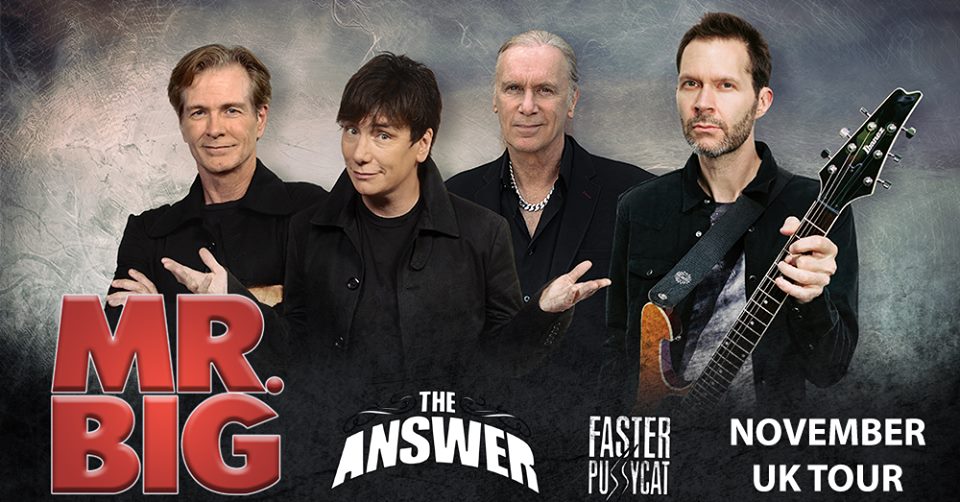 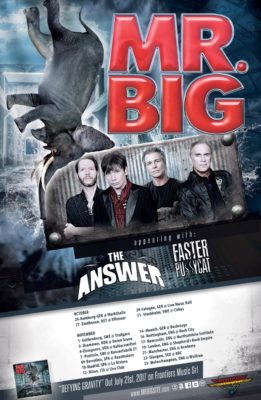 Mr. Big play six UK dates in November to promote their new album,‘Defying Gravity’, which was

released in July. The concluding shows of a headlining European tour on which The Answer and

Faster Pussycat will also appear, they take place as follows :

‘Defying Gravity’ is out on CD, deluxe CD/DVD, LP and digital formats, with a limited deluxe 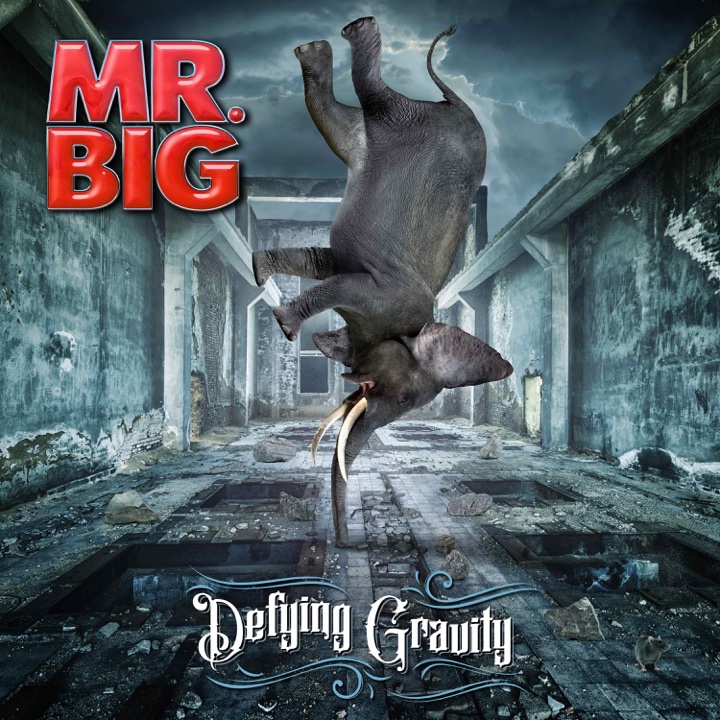 “Possibly the freshest sounding album Mr. Big have made in years. Defiant indeed”

‘Everybody Needs A Little Trouble’  http://bit.ly/2s8c60k

The Making Of ‘Defying Gravity’  http://bit.ly/2xeXdbO 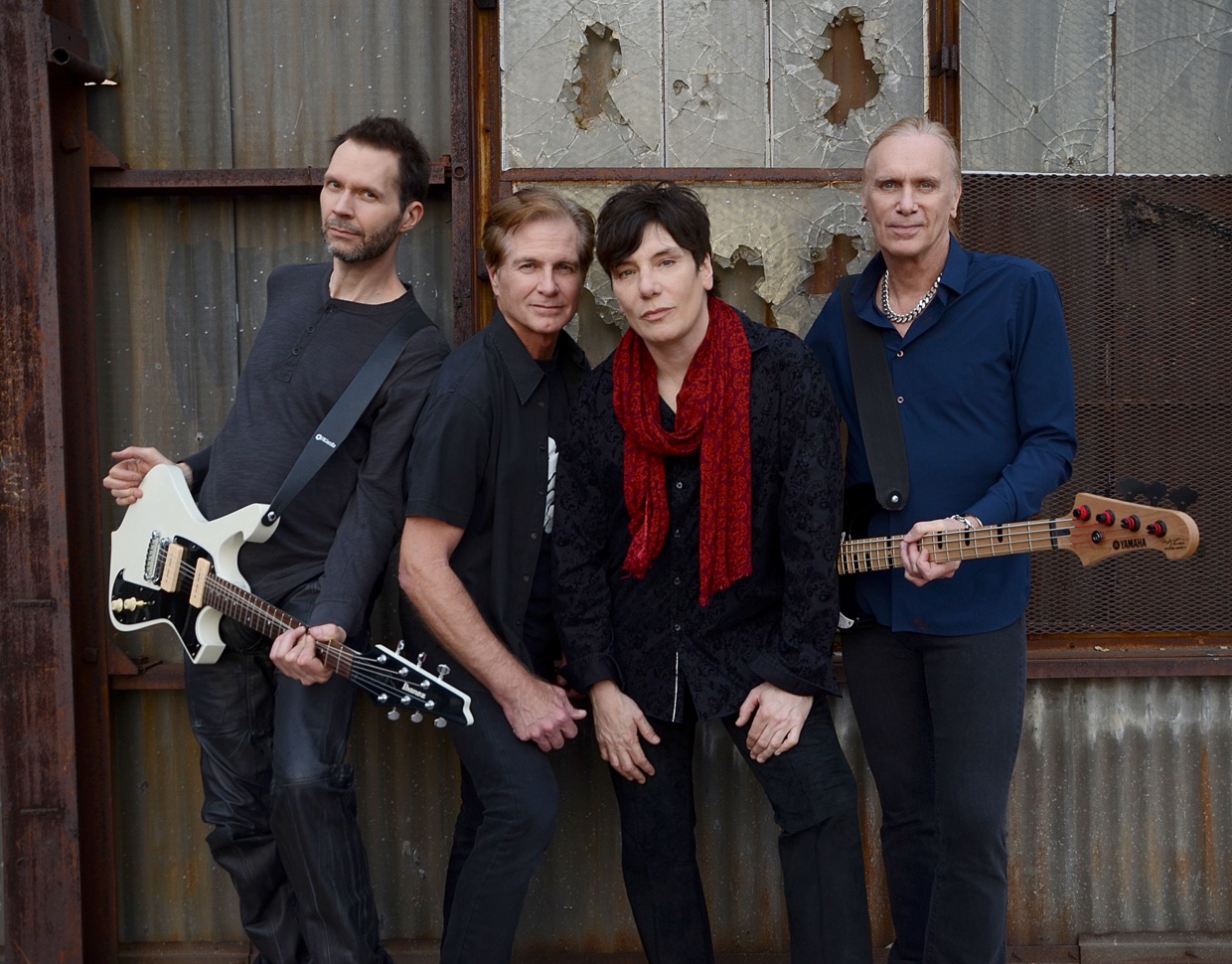 the music kicks in on ‘Open Your Eyes’, an instant callback to the start of ‘Addicted To That Rush’,

the hard-charging lead track on the band’s self-titled 1989 debut), Mr. Big plants the flag between

past, present and future with ‘Defying Gravity’, the band’s ninth original studio album.

the aforementioned Elson (Journey, Europe, Lynyrd Skynyrd), who is back behind the boards for

patented Mr. Big blend of crunch and melody, from the freight-train ride of ’Open Your Eyes’ to the

‘To Be With You’) to the barnstorming slide-blues closing track, ‘Be Kind’. Overall, the album is

prime evidence that all Mr. Big remains tethered to is their ongoing pursuit of creative excellence.

of the new album. “I know that any ideas I bring into the studio have to go through our long-

established band filter, which means the songs all have to rock, have melody, and put a grin on

the faces of all my bandmates to make the final cut.” What that means is Gilbert, vocalist Eric

Martin, bassist Billy Sheehan and drummer Pat Torpey all have to agree on the finished product,

as does touring drummer Matt Starr, who also joined in on the studio proceedings for the album.

That ‘all for one, one for all’ mentality is one of the main things that fuels Mr. Big to reach for new

heights whenever they are recording. “That’s what makes a band a band,” believes Torpey.

“I think we all feel that way. It’s not one guy’s vision that the others just follow. We’re always

kicking ideasaround to come to some kind of consensus. That makes Mr. Big music what it is.”

Adds Sheehan, “I like recording with a sense of urgency. Put a mic in front of us, roll tape, and

that should sound like what you’re hearing from us live. When you can create that kind of pressure

in the studio in a short amount of time, it makes for better songs — and better performances.”

Once Martin got in sync with Gilbert, the album took shape in a relatively short amount of time.

“My music tells you more about me than I can actually tell you myself,” the vocalist admits.

“‘Defying Gravity’ is about ignoring everybody who tells you it can’t be done, that it’s impossible

to do what you love. You have to stand your ground whenever someone tells you to give up your

dream to do anything your heart desires in favour of a life that’s safe and conventional.”

Mr. Big couldn’t be more pleased to be working with Elson again. “Kevin Elson is really good at

steering the ship through rough waters and making it seem like they’re not,” notes Gilbert.

“He’s a very even-keeled guy — mellow, but he still gets it done.” Sheehan concurs: “It was

glorious and fantastic. Kevin creates an atmosphere of ease and creativity. He’s full of so many

ideas. Really a wonderful man.” Torpey adds, “We’ve got a lot of history with him. He’s a great

guy, super-talented. It’s not like having a dictator for a producer, just somebody who barks

commands. He’s got so much experience, history and pedigree — and he’s also a really good

friend, so the vibe in the studio was perfect.” Sums up Martin, “I always loved Kevin because of

his musical sense, and I love singing in front of him. Kevin has a different approach that’s more

cerebral. He has a lot of ideas like a musician and songwriter would. He is a huge piece of our

recording puzzle. He’s a musician’s friend. He gets good sounds, and I trust his insight and

criticism. He has the golden touch, and knows how to make great voices sound even greater.”

One of the key tracks on the album, ‘1992’, harkens back to the glories of much headier days

for Mr. Big, albeit with tongue planted firmly in cheek. “That was an incredible period in our lives,

right when the rumblings of grunge were starting to happen,” Gilbert points out. “So here I am

writing about and tweaking something that was so positive in just about every way, but it did

open the world to us. Suddenly, we were playing stadiums in Indonesia, just going all over the

place. And to this day, whenever we start a  tour, we end up going all around the world.

That whole era, back when we all still had giant hair(!), really opened the door for us.

Thankfully, people still gravitate toward the thing that is still important, and that’s the music.”

Sheehan adds his own spin: “It’s a song about its own history. It reminds me of Deep Purple’s

‘Smoke on the Water’, a song where a band looks back and talks about how it all went down in

a clever way. ‘1992’ certainly pops for me from a philosophical point of view.” Muses Torpey,

“Who would have thought we would actually be talking about something like this 25 years later?

But I’ve had those thoughts myself. It’s really interesting to reflect back like that and actually

have it come out in a song. It’s an epic kind of song that’s got the classic rock stuff, the crazy

guitar-and-bass stuff, and the big vocals from Eric. It’s a Mr. Big song, no doubt.”

Speaking of the band’s inherent instrumental virtuosity, there is plenty of it on display during the

middle section of ‘Mean to Me’, where Paul and Billy trade a score of hot licks back and forth.

“That song came about very quickly,” Gilbert reports, “and the solo was a first take with no

overdubs at all; it was done live with the band. The delay I used helped make it twice as fast,

but you still have to be dead-on accurate, and play the notes super-staccato so that it doesn’t

get sloppy. Billy, however, does it all for real where no effects were necessary. He battles my

technology-aided solo with the pure fire from his hands.” Observes Torpey, “The songs

themselves are always important, but we always want to come up with the right vehicle to have

some gymnastics between those twin towers of rock, Billy and Paul. That’s a big part of what

we do, and we utilise it. I hope the fans like it.”

Martin is proud that ‘Defying Gravity’ showcases the best of what Mr. Big has to offer. “There’s

something about this band. We’ve been through a lot of stuff together,” he notes, “but there’s a

spiritual bond we all share, no matter what. And that raises you up to give the best performance

you can for a record that came together so quickly, like this one did.” Adds Sheehan,

“This record really seems to fit in with some of my favourite times in music, which were right

have that here with the background vocals we were able to add to some of the songs.”

For his part, Gilbert is very much looking forward to bringing ‘Defying Gravity’ to life for Mr. Big

fans the world over: “We’re aware that we’re going to be playing this music onstage, and we’re

eyes of the audience. We know our audience quite well, and we’re looking forward to seeing

their reactions to the album.”

Torpey has the final word: “The title says it all: ‘Defying Gravity’. We’re still here, and we’re still

keeping the ball rolling down that hill. We’re still doing it. The album has a positive message,

and that’s what I like about it. We can still fly, even after all these years.”

Indeed, Mr. Big’s keen combination of their virtuosic nature with a DNA-infused sense of

melody continues to enable listeners the ability to sing along to every word they hear. Not a lot

of acts can do that as deftly as Mr. Big does, and ‘Defying Gravity’ finds this still-hungry band

collectively leaning into it to push their music into new stratospheres. Climb aboard. 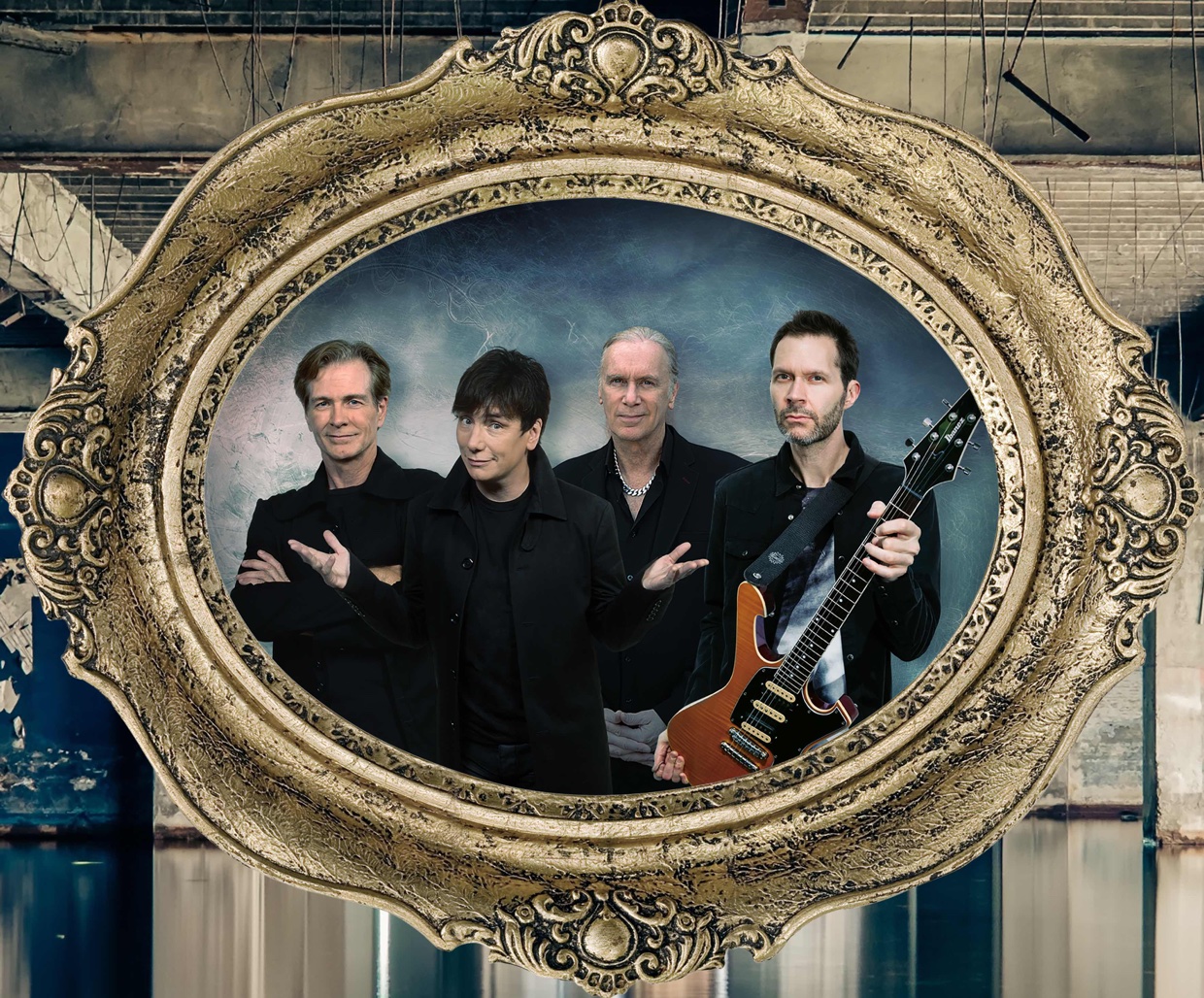 FIT FOR AN AUTOPSY announced as support for SEPULTURA