When you hear the word Necronomicon, you’d be forgiven for immediately reaching one of several conclusions. Naturally, first and foremost, there are the fictional works of one Mr H.P. Lovecraft, who, with his often disturbingly psychedelic horror literature, has not only become one of history’s most important novelists, but a major source of inspiration for everyone in creative media from movies, music and video games.

Speaking of movies, secondly you’ve got the “Evil Dead” franchise for example, which despite its dark slapstick humor and, yes, botanical rape scenes, (Imagine something between “The Day Of The Triffids” and…Hentai… and you’re on the right, albeit wrong path) is built around the now infamous book of the dead. Thirdly of course, there’s the possibility there exists a sort of comic-con for necrophiliacs, or, you could simply believe I made the word up to cheat at Scrabble.

Alternately, I could be talking about today’s band; NECRONOMICON. Yes enough of the digression, Necronomicon are a Canadian blackened death metal outfit hailing from Montreal, consisting of vocalist/guitarist The Witch, bassist Razputin and drummer Divider, and credit to these corpse-paint-clad Canucks they’ve already notched up a thirty year career in underground circles. To celebrate such longevity they’ve recently released their latest studio album through Season Of Mist entitled “Unus”, essentially meaning ‘One’. The question is, will this album be the one to raise the dead, or will it simply put you to eternal rest? Let’s find out…

We open up with “From Ashes Into The Flesh” and immediately we’re met with some piercing strings giving off an almost Hitchcock inspired vibe, before we’re thrust into a pummelling duel onslaught of haunting orchestration and black metal blast beats. Imagine the composer for “Psycho” or, say “The Omen” was on drugs essentially.

The track itself does manage to combine both beautiful and brutal components to make a genuinely intense, gripping piece of music however, and it’s a strong start. Speaking of strong, we follow this up with easy album highlight “Infinitum Continuum” and what an amalgamation of musical styles this is. Initially very TRIVIUM like with its opening drum fill, you could swear this was going into a cover of “Pull Harder…” for a split second…that is until the blackened metal style makes its presence felt. Quite regimented in delivery, it’s really quite run of the mill until the tracks crescendo where they surprisingly take on a more Gothic-metal tone, channeling the likes of SISTERS OF MERCY with some almost angelic, hook-laden melodies and hard rock; utterly superb this.

“The Price Of A Soul” returns to a more, movie-score based instrumental style, bridging Satanic overtones with an almost cartoonish Danny Elfman inspired vibe during its brief runtime…”Fhtagn” is another interlude, and while it sounds like it’s covered in phlegm, it’s a R’lyehian nod to those Lovecraftian influences in their name, with the interludes name taken directly out of verbiage from “The Call Of Cthulu”.  Elsewhere “A Thousand Masks” takes on a more middle-Eastern, almost tribal approach in moments, which combined with the already established blackened death traits allows for an interesting cultural combination musically. Finally then, “Vox Draconis” closes the album with a predominantly more thrash-inspired piece of metal; really up-tempo and riff-heavy, resulting in an entertaining climax.

While there’s enough here to appease traditional blackened metal fans, there’s just enough here to at least draw interest from elsewhere too, while retaining the core principles of the genre. “Unus” might not be THE one in terms of defining black/death albums, but it’s certainly one to check out at least. “Fhtagn”…sorry, could you pass a tissue please? 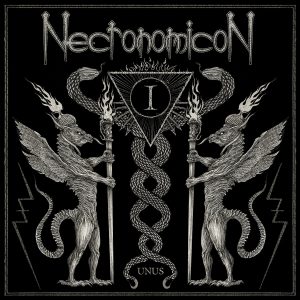