Colour Of Noise describe themselves as from the school of classic rock and wear their influences of Free, Bad Company and Led Zeppelin amongst others, fully visible on their collective sleeves – ‘great songs recorded in the old fashioned way’. They use carefully chosen vintage and custom guitars, backline and record onto two inch tape.

Colour of Noise are launching their debut album through PledgeMusic, the direct-to-fan website that allows fans to participate and be part of the making of the album. As well as signed CDs, vinyl and merchandise, Colour of Noise’s PledgeMusic campaign includes studio visits, updates and exclusive tracks – including when you sign up to the Pledge campaign an immediate download of their first single ‘Head On’:

All the details and more on www.pledgemusic.com/projects/colourofnoise 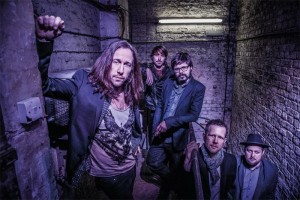 Interesting Fact : Matt and Bruce met for the very first time at the Download Festival in 2012 when they were performing with Little Angels and Furyon respectively

More Information on Bruce John Dickinson and Matt Mitchell.
Bruce John Dickinson was previously in Little Angels. Through the late 80’s and early 90’s, Little Angels achieved 11 top forty hit singles and 4 Top 20 albums – including a #1 with 1993’s much acclaimed ‘Jam’.
Little Angels toured across the globe with Bon Jovi, Van Halen, Aerosmith, Bryan Adams, ZZ Top and Aerosmith. The band ended in 1994 and reformed in 2012 for a triumphant return at Download festival. This was followed up with their own headline tour, culminating in an appearance at the 2013 Isle of Wight festival supporting Bon Jovi.
Bruce is also a founder/director of the much respected and award winning British Institute of Modern Music (BIMM) franchise of music colleges and the Detroit Institute of Music Education (DIME). Alongside Colour Of Noise activities, Bruce continues to work in Music Higher Education writing degree courses and ‘making the academic case for rock n roll’.

Matt Mitchell was a founder member and lead singer songwriter of cult melodic rock act Pride and more recently the highly respected Furyon. Furyon played Download in 2012 and Bloodstock Festival and have enjoyed support from Classic Rock and Metal Hammer magazine. Matt and his band have a healthy and loyal audience of discerning rock and metal fans.