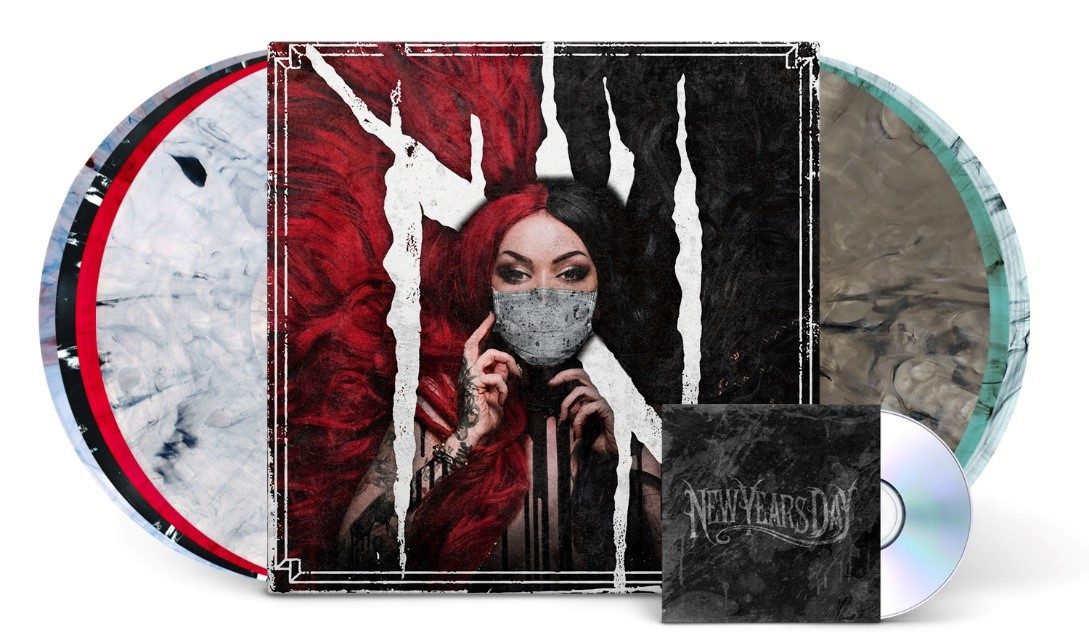 15th November 2019 0 By John Deaux
For the First Time, All 7 New Years Day Albums Unbreakable (New Color – Red Smoke), Diary of a Creep, Malevolence, Victim to Villain, Epidemic, The Mechanical Heart EP & My Dear Are Pressed on Custom Colored Vinyl!
The Box Set Also Includes a Blu-Ray of Fan Favorites “Two In The Chest, One in the Head”; “Angel Eyes”; “Defame Me”; “I’m About To Break You”; “Disgust Me”; “Shut Up” & “Come For Me” + a Four Page Picture Book of Photos Hand Picked
by Ash Costello!
PRE-ORDER TODAY | OUT JANUARY 24, 2020

(Anaheim, CA – November 15, 2019) – With the first decade of New Years Day, rock music’s breakout band wrapping up, Ash and co. are excited toannounce the release of their first box set
Through The Years, the limited edition set features all 7 of their albums available for the first time on custom colored vinyl, a blu ray of their beloved music videos and a four-page picture book of never-before-seen photos of Ash and New Years Day from their humble beginnings. The photos were handpicked and the captions were hand written by Ash Costello. This is limited to 500, fans can pre-order while supplies last HERE.
Ash Costello states, “I recorded New Years Day’s first album ‘My Dear’ in my friend’s bedroom closet in 2005, nearly 15 years ago. From then till now, every song recorded has been like a ripped page from that day in my personal life’s journal. It’s exciting to see it all together now, like a map of our bands career. I hope everyone enjoys being able to own the entire journey, and I hope it inspires the listeners to never give up on their dream.”
Through The Years is a 6 pound box, with 7 custom colored LP, blu ray and a four page picture book. It retails for $125.98. This is a must for anyone who has been a fan of New Years Day since the beginning. 2020 launches the band into the second decade of their incredible career so it is only fitting for a band named New Years Day to launch their box set not only in the New Year, but a new decade. Ash and co. are currently on tour in Europe/UK supporting Halestorm and In This Moment. Their new single “Come For Me” is celebrating nine weeks on the Active Rock chart; this is their follow up to the top 15 smash “Shut Up”.
About New Years Day:
Formed in Orange County, Calif. by Ashley Costello, New Years Day shook the scene with their Century Media debut, Victim to Villain, in 2013 featuring their breakout single “Angel Eyes.” The five-piece later cemented their place in the heavy music landscape with their Epidemic EP and critically-acclaimed Malevolence full-length in 2015, clocking more than 20 million views on YouTube. The band has since become the most visually-captivating group in modern rock, playing for millions of fans around the world, sharing the stage with Ozzy Osbourne, Halestorm, Nine Inch Nails, Escape The Fate, Hellyeah and Five Finger Death Punch while also headlining the longest-running touring festival, Vans Warped Tour, in 2017. In 2018, they released their EP, Diary of a Creep, to pay tribute to the artists who shaped them thus far. The EP featured renditions of Garbage’s “Only Happy When It Rains,” New Order’s “Bizarre Love Triangle,” No Doubt’s “Don’t Speak” and their original track “Disgust Me”.
On April 26, 2019 New Years Day shocked critics and fans with their flawless album Unbreakable. The band enlisted powerhouse producers Mitchell Marlow (All That Remains, In This Moment) and Scott Stevens (Halestorm, Shinedown & American Authors) to create an album that combines heavy rock with pop sensibilities. Upon release, Unbreakable trended #1 on the iTunes rock chart, celebrated over 18 weeks on Billboard’s Current Hard Music Albums Chart. The singles “Shut Up” and “Come For Me” became the band’s first two active radio hits. The album surpassed 20 million global streams, establishing New Years Day as a force to be reckoned with. New Years Day celebrates a 10+ year career with over 66 million global streams, 40 million YouTube views & a top 15 Billboard Mainstream Rock Charting hit.
The band has been touring nonstop this year in support of Unbreakable. They kicked off the year touring with Falling In Reverse and have gone on to support Godsmack and perform a handful of North American headline shows. They are on tour in Europe and UK with Halestorm and In This Moment. In March they will not only tour but headline for the first time in Australia.
NEW YEARS DAY TOUR DATES
w/ Halestorm & In This Moment
November 16 – Munich, Germany – Tonhalle
November 18 – Offenbach, Germany – Capitol
November 19 – Hamburg, Germany – Grobe Freiheit
November 20 – Amsterdam, Netherlands – AFAS Live
November 24 – Glasgow, United Kingdom – The SSE Hydro
November 25 – Nottingham, United Kingdom – Motorpoint arena
November 27 – Cardiff, United Kingdom -Motorpoint Arena Cardiff
November 28 – London, United Kingdom – Alexandra Palace
Headline Tour – Australia
March 19, 2020 – Adelaide, Australia – Lion Arts Factory
March 20, 2020 – Ascot Vale, Australia – Download Australia *festival date
March 20, 2020 – Melbourne, Australia – 170 Russell
March 21, 2020 – Parramatta, Australia – Download Festival *festival date
March 21, 2020 – Sydney, Australia – Factory Theatre
March 22, 2020 – Brisbane, Australia – The Brightside Brisbane
Stream/Purchase Unbreakable:
Pivot
Stream/Purchase “Come For Me”
Pivot
Stream/Purchase “Shut Up”
Pivot
Stream/Purchase “Skeletons”
Pivot
Follow New Years Day:
Website
Facebook
YouTube
Twitter
Instagram
Purchase Exclusive New Years Day Merch/Music Bundles:
Century Media Store