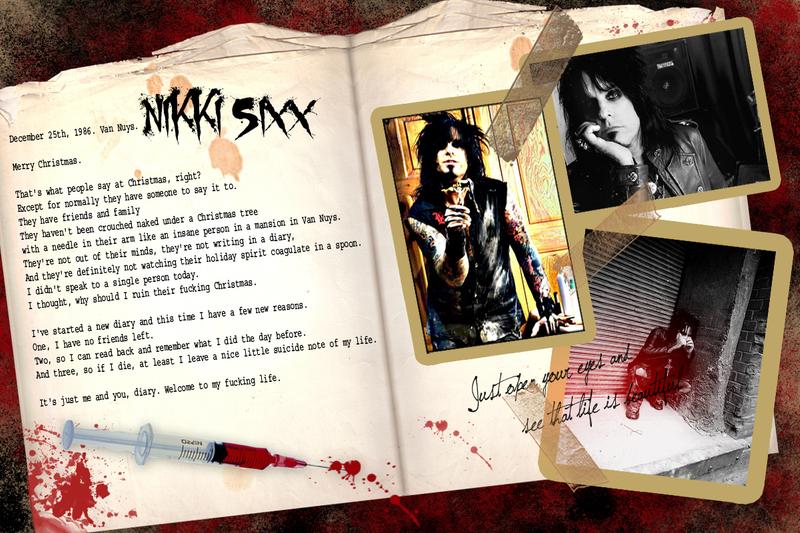 
WHAT:         New video for “X-Mas In Hell” the band’s poignant track from The Heroin Diaries
Soundtrack

WHY:         When Nikki Sixx’s “The Heroin Diaries” was published in 2007, it was the first book to be accompanied by a soundtrack. Recorded by SIXX:A.M. the 13 tracks on the record each correspond to one month of Sixx’s diary, which he kept from 1986 to 1987 and formed the basis for the autobiography. ‘Xmas in Hell’is the first track on The Heroin Diaries Soundtrack, based on Sixx’s 1986 Christmas Day diary entry and this is the first time that a lyric video has been made to accompany this holiday favorite for SIXX:A.M. fans.

Nikki Sixx famously said “There is something about spending Christmas alone, naked, sitting by the Christmas tree gripping a shotgun, that lets you know your life is spinning dangerously outta control.” Viewers of Mötley Crüe’s Netflix Movie ‘The Dirt’ will recall many of the harrowing scenes where Nikki is trying to escape his addiction demons and this song paints a strong visual picture of his struggles with the dark take on Carol of The Bells break out section of‘X-mas in Hell’.

Nikki Sixx “I am trying to take things that happened in my life and turning them into positives, Opioid Addiction usually ends in death and that is something we would like to turn around.”

Allen Kovac CEO of Better Noise Music added “More people died in the USA last year of opioids than car accidents, Nikki is working with the Surgeon General in the USA to raise awareness of the Opioid Crisis and help destigmatize addiction. Nikki Sixx wants us all to remember that there are people in recovery or struggling with opioid addiction right now during the holiday season”.

Sixx has been working closely with The Global Recovery Initiatives (GRI) to use the power of conversation to overcome the stigma plaguing opioid use. So if you know someone who is struggling, reach out and be a friend at this potentially lonely time.

WHERE:
Find the SIXX:A.M. video at – https://youtu.be/tUi1jKvh1-w
Stream Xmas In Hell here
Stream The Heroin Diaries 10th Year Anniversary Soundtrack here
If you have been affected by any issues within this video you can contact the The Global Recovery Initiatives (GRI) here

That’s what people say at Christmas, right?
Except normally they have someone to say it to.
They have friends and family,
And they haven’t been crouched naked under a Christmas tree
with a needle in their arm like an insane person in a mansion in Van Nuys.
They’re not out of their minds, they’re not writing in a diary,
And they’re definitely not watching their holiday spirit coagulate in a spoon.
I didn’t speak to a single person today.
I thought why should I ruin their fucking Christmas.

I’ve started a new diary and this time I have a few new reasons.
One, I have no friends left.
Two, so I can read back and remember what I did the day before.
And three, so if I die, at least I leave a nice little suicide note of my life.

It’s just me and you, diary. Welcome to my fucking life.

Nobody would believe the shit that happens inside my head, it’s haunted.
Now I’ve come down from the drugs
it seems like a sick play that I saw in a theater somewhere.
Thirty minutes ago, I could’ve killed someone.
Or better yet, myself.