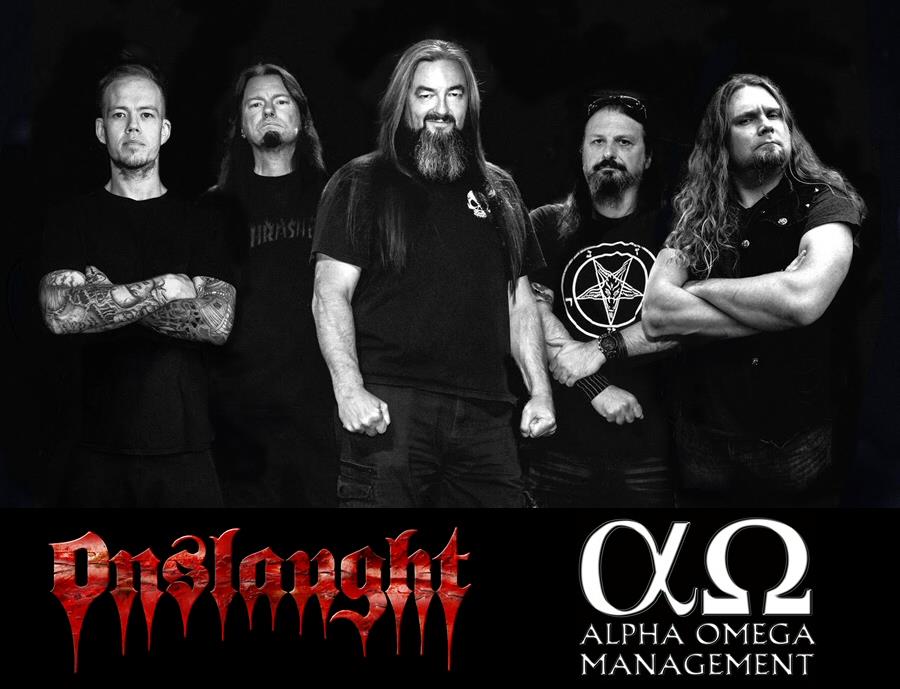 ALPHA OMEGA Management is extremely thrilled to announce the signing of the UK Thrash Legends ONSLAUGHT!
ONSLAUGHT stated on the signing:
‘Onslaught are incredibly happy to announce Alpha Omega as their new  managerial representation. We have set ourselves an ambitious set of goals, targets and achievements for the coming year and beyond. We honestly feel that Alpha Omega are the right team to ensure that those ambitions become a reality and to take them on even further! Buckle up ladies and gentlemen, things are about to get crazy!’

ALPHA OMEGA Management‘s General Manager Alex Azzali adds:
“We couldn’t be more excited to welcome the UK Thrash Legends ONSLAUGHT to our roster family! No need to say that with their new line-up, these guys are relentless and hungry to blast the world harder than ever! Cannot wait to start working for their ambitious goals! Stay tuned, great things are going to happen!”

As previously ONSLAUGHT announced, the band will unveil their new line up on the main stage at Bloodstock Festival 2018 on Friday 10th August. Longstanding members Nige Rockett (Guitar), Sy Keeler (Vocals) and Jeff Williams (Bass) will be joined by James Perry (Drums) and Wayne Dorman (Guitar).

UK Thrash legends ONSLAUGHT are one of the most explosive and controversial Metal bands ever to come out of the UK. Releasing 3 now legendary albums in the 80’s (Power From Hell, The Force, In Search of Sanity), the band marked it’s path to become a major influence for many Metal generations to follow. Since reforming in 2005, the band have performed countless shows / tours all across the globe, earning themselves the reputation as one of the very best Live Acts in the scene today, with crushing performances at Wacken, Bang Your Head, Thrash Domination, 70000 Tons of Metal, Hammersonic, Hellfest, Brutal Assault & Bloodstock Festivals to name just a few. With four critically acclaimed album releases in 2007 / 2009 / 2011 & 2013 (Killing Peace / Live Damnation / Sounds of Violence / VI) and with the back catalog being released no fewer than 3 times ONSLAUGHT stands as one of the most respected acts in the Metal scene today.

During the mass promotion in the USA for the latest studio album ‘VI’ we saw ONSLAUGHT reach and stay in the top 10 of the CMJ charts for 4 consecutive weeks. ‘VI’ was also the number 1 selling thrash metal album with Amazon.com becoming one of the biggest selling acts in North America for their Label AFM records.
Early 2016 saw the release of ‘Live at the Slaughterhouse’ a live DVD that celebrated the power and raw intensity of an ONSLAUGHT show that was well received by the public and critics alike. 2016 also saw ONSLAUGHT as the first international thrash metal band to play Vietnam as well as touring China, Taiwan and Indonesia and Europe.
2017, the band hit South and Central America, Mexico and once again Europe. One of the highlights of the year however was breaking new ground as the first legitimate international thrash metal band ever to play in the Lebanon. With a new album now well underway the ONSLAUGHT continues, as relentless and hungry as ever!