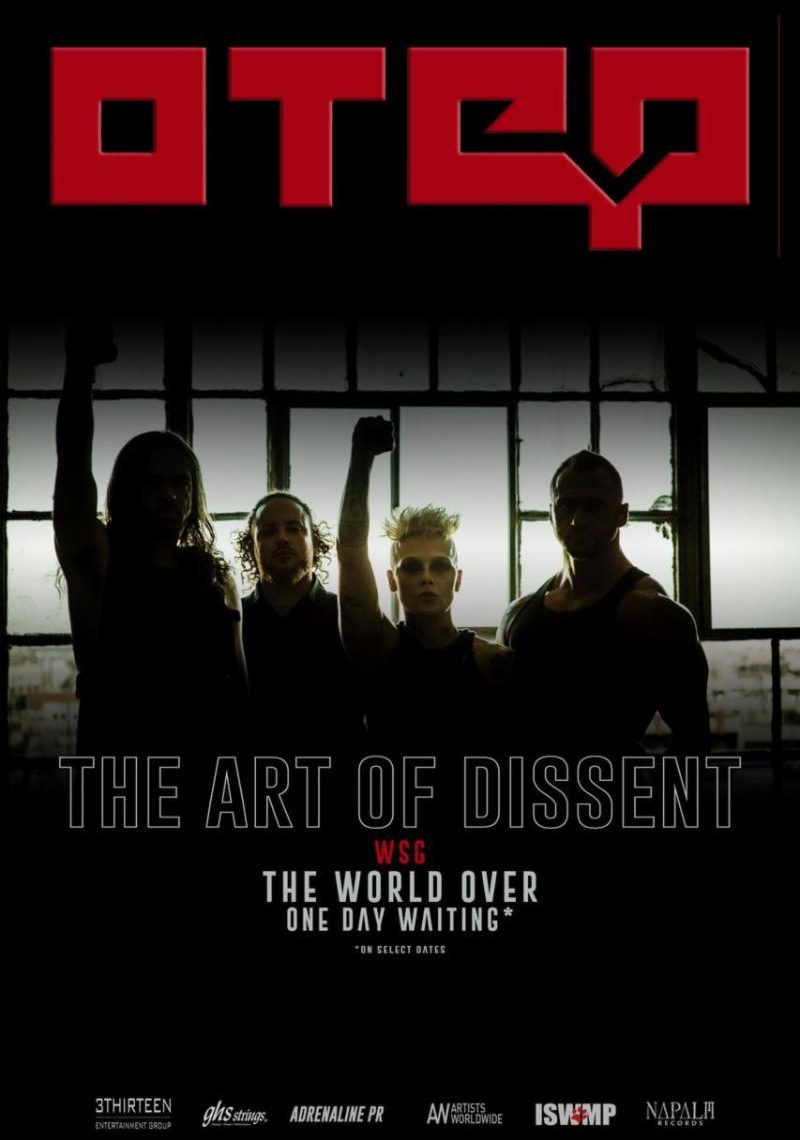 This summer, heavy revolutionaries OTEP unleashed their most uncompromising, candid, all-inclusive and controversial assessment of the current residing political regime that they have ever released – the new album Kult 45. In support of the album, OTEP recently announced her upcoming “The Art of Dissent” U.S. headline tour, kicking off in Bakersfield, CA on Friday, November 23. Tickets are available now via all venues – see below for a full listing of tour dates.

Otep Shamaya says, “In a time when apathy has been weaponized to suffocate the voice of the people, in a time when Americans are told not to believe what we see with our own eyes but to believe what one bloviating sack of sewage and a gutless Republican Party who care only about preying on the working class and the working poor just to feed his KULT from the same gruesome trough of racist, homophobic and sexist slop. We are proud to bring THE ART OF DISSENT tour to the people to hopefully remind them just how powerful we are and how important we are, as a nation, as a democracy, and that it’s damn well worth fighting for.”
OTEP “The Art of Dissent” U.S. Headline Tour:
11/23 – Bakersfield, CA @ Club 1933
11/24 – Tucson, AZ @ House of Bards
11/27 – Milwaukee, WI @ Shank Hall
11/28 – Columbus, OH @ Newport Music Hall
11/29 – Arlington Heights, IL @ HOME Bar
11/30 – Geneva on the Lake, OH @ The Cove
12/1 – Chesterfield, MI @ Diesel
12/2 – Dayton, OH @ Oddbody’s
12/4 – Clifton, NJ @ Dingbatz
12/5 – Richmond, VA @ Canal Club
12/6 – Philadelphia, PA @ Underground Arts
12/7 – Auburn, ME @ Sapphire Club
12/8 – Easton, PA @ One Centre Square
12/9 – Amityville, NY @ Revolution
12/12 – Atlanta, GA @ Masquerade (Hell)
12/13 – Spartanburg, SC @ Ground Zero
12/14 – Huntsville, AL @ Sidetracks
12/15 – Clarksville, TN @ Warehouse
12/16 – Memphis, TN @ Rockhouse Live
12/18 – Waterloo, IA @ Spicoli’s
12/19 – Lincoln, NE @ Royal Grove
12/20 – Greeley, CO @ Moxie
12/21 – Denver, CO @ Herman’s Hideaway
12/22 – Colorado Springs, CO @ Sunshine Studios
12/23 – Salt Lake City, UT @ Liquid Joe’s
Kult 45 is available now in digital formats here, and/or CD and vinyl formats via the Napalm Records Online Store. You can also stream Kult 45 in full via Spotify here. While online, watch a new 20+ minute documentary about the making of Kult 45, performing together as a band, and more, here: https://youtu.be/titpZgl4F6Q
“Protest music is alive on well on Otep Shamaya’s new bible for dissenters.” – Alternative Press
“Kult 45 sees OTEP at their controversial best, assessing and tackling the issues swimming around the political pool party that currently harbours their capital.” – Metal Wani
“OTEP speaks out, savages President Trump and stands tall on Kult 45.” – Salt Lake City Weekly
“[OTEP] is a powerful voice for civil rights, for people of color, for the LGBTQ community, for the working class, for animal rights.” – Reading Eagle
“OTEP‘s message is one that needs to be heard.” – Jamestown Post-Journal
Throughout the span of her career, Otep Shamaya has been an undeniable force in bringing awareness via various acclaimed mediums to the social and political injustices felt by various communities and subcultures. For years, publications such as Revolver Magazine have lauded Shamaya for “following in the footsteps of outspoken musicians from folk singer Woody Guthrie to Rage Against The Machine‘s Zach de la Rocha”, dubbing her “one of music’s catalysts for social change”. So, with the political climate as it is today, now it’s the perfect time to impact with Kult 45.
Kult 45 was recorded at The Lair in Los Angeles, completely utilizing the same equipment used for OTEP‘s first album, Sevas Tra (down to Shamaya’s vocal microphone, a SHURE Beta 58), in order to create a sound reminiscent of their roots. Kult 45 was self-produced by Otep Shamaya and Aristotle, with assistant engineering from Larry Goetz, Nicolas Schilke and Lizzy Ostro.
OTEP does not hold back on Kult 45, pointing out all sorts of political duplicities and leaving them in their wake. The band explodes on aggressive, adamant anthems like “Halt Right” and “Molotov”, which act as timely outcries against the recent resurgence of hate groups.Tracks like the in-your-face “Cross Contamination” explore the hypocrisy of the evangelical right giving Trump a pass on his infidelities, and cherry-picking scriptures to fit their ideologies. “Invisible People” approaches immigration issues while pointing a strong finger at Trump, the electronically-charged “Boss” aims to break, fight, and redefine gender roles, “Shelter In Place” investigates the topic of school shootings, and “Trigger Warning” targets rape culture – specifically Stanford rapist Brock Turner -with a vengeance.
One of the last tracks on the album is a true-to-form cover of “Wake Up” – an homage to political music icons, major Kult 45 writing inspirations, and original track recording artists Rage Against The Machine. The album closes with the bonus track “The Tribe Speaks”, featuring recorded voicemails from fans expressing how OTEP‘s music has changed their lives. Shamaya says the voicemails are truly moving and keep her fighting as an artist and activist.
OTEP is:
Otep Shamaya: Vocals
Aristotle: Guitars
Drewski Barnes: Bass
Justin Kier: Drums