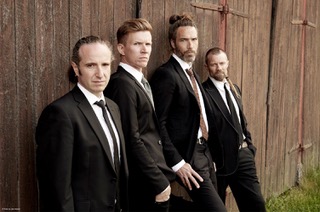 While Swedish progressive metal / rock pioneers and innovators Pain of Salvation continue to challenge and bend stylistic boundaries with their frontline albums (Most recently: “PANTHER”, 2020), InsideOutMusic continues to re-work the group’s comprehensive and ground-breaking back-catalogue…

Both releases come as Gatefold Double-LP’s on 180g. vinyl with insert sheet and full album on bonus CD, available in the following variations/limitations:

The pre-order for both vinyl re-issues is now available here:

Pain of Salvation’s Daniel Gildenlöw checked in with the following comment:

“So, we can’t come and play for you, but in this weird time of separation, we are all somehow closer to one another than ever. Please invite us into your hearts and homes in the shape of these two albums that are finally released on vinyl, after all these years. We know, judging from the number of questions and requests over the years, how important this day is for many of you, and it makes us very happy to be able to bring you the news. Your. Wait. Is. Over.

At http://painofsalvation.com/store we will have signed colored versions available, 100 copies worldwide only, and the first 30 copies of each version will be numbered and have a handwritten lyric quote on the front cover. All pre-sales come with two shop-specific postcards.”

Additionally, Pain of Salvation’s drummer Léo Margarit prepared a special drum playthrough video for the “BE” song “Nihil Morari” to enhance the announcement of these vinyl re-issues.

You can check out the clip here: https://youtu.be/94J7R5jhDVo

Léo Margarit commented:
“I played “Nihil Morari” for the first time when I pressed “record” on my pro tools system for that video recording…While I knew all about its intricacies for having listened to it just about a million times, it proved rather difficult to perform well right away…! Nonetheless it was really fun to do and I hope I’m making Johan Langell proud!”

Pain of Salvation have most recently released the studio album “PANTHER”, which managed to enter various international sales charts including the following: Germany # 19, Switzerland # 18, Austria # 43, Belgium (Wallonia) # 42, France # 125, UK Rock Album Chart # 12 as well as # 21 in the “Current Hard Music Albums” chart in the USA.

Check out these video links for an introduction to Pain of Salvation’s “PANTHER” album:
“ACCELERATOR”: https://youtu.be/5QKmOJl4GXQ

You can still order “PANTHER” in its various formats here: https://PainofSalvation.lnk.to/Panther

Pain of Salvation also recently released a special re-issue edition for their “The Perfect Element, Pt. I” album from 2000. Celebrating the 20th anniversary of the band’s third album, the re-issue version is entitled “The Perfect Element, Pt. I (Anniversary Mix 2020)” and comes remixed by Pontus Lindmark as well as mastered by Thor Legvold / Sonovo. The release features slightly revised artwork, new liner-notes and is available as limited 2CD Digipak and Digital Album (with a total of 8 bonus tracks) as well as in the Gatefold 2LP format on 180g. vinyl with the entire remixed album as bonus CD.

Check out the album’s digital singles for a better idea of the new mixes:

You can order the release in its various formats here:
https://painofsalvation.lnk.to/ThePerfectElementI2020