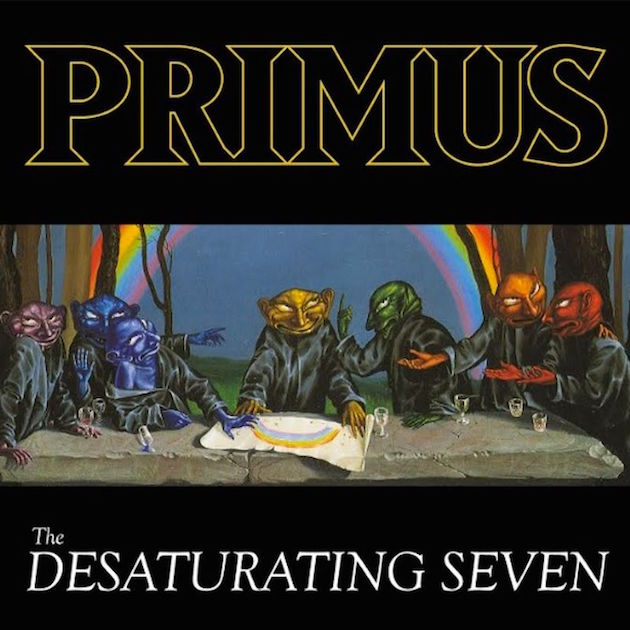 There’s nothing better than music that makes you feel something, right? But what if that feeling is foreboding or a strange uneasy anxiety? Well progressive rock pioneers, Primus are back with The Desaturating Seven, a seven track concept album that I feel is absolutely intended to take you on an off kilter, sideways journey into uneasiness, with a story of seven colourful trolls who take their names and skin tone from the colours of the rainbow, and who with ill intent, decide to drain (or desaturate) and consume the colours of said rainbow.

The benefit of having such a concept to work with is that there are no rules, limitations or restraints on where you can go or how utterly barking metal you can get. Never and band to shy away from a little craziness, Primus open up The Desaturating Seven with The Valley, which uses a plethora of  discordant sounds and melodies coupled with a narrative that outlines the story that we’re going to experience over the coming tracks. The uncomfortable feeling of uneasiness is quickly ensconced in the knot that sits in my sternum while listening to this album.

Even Les Claypool’s bass tone seems to have been specifically engineered to make the listener as uncomfortable as possible. The dirty bass tone carries you apprehensively into The Seven, which introduces us to our villainous protagonists and takes us on plodding ride that further hammers a creepy, askew feeling into your ears and imagination.

I’m not sure I like how this album makes me feel. It’s akin to watching a sadistic horror that you know your shouldn’t be watching because it’ll stay with you for days after or having a nightmare about an even more dark twisted version of 1985’s Return to Oz, with the head swapping tirant Princess Mombi or the evil, chicken fearing Gnome King. It’s that kind of messed up.

My intrigue outweighs my uneasiness, so I plough on into The Trek, which tells of the long journey and mindset of The Seven as they make their way toward the Valley of the Rainbows, with no less stomach knotting trepidation than the previous tracks. We’re only up to track four The Scheme but it feels like we’ve come so far. The Scheme is the highlight of The Desaturating Seven, for me. It’s more driving and heavy than the other tracks up until this point while maintaining the style and feel….. but sadly, as far as my opinion goes, this is where our journey ends.

I’m kind of glad to, because I’m all out of superlatives and synonyms of ‘uneasy’. Everything after track four feels like filler because Primus ran out of ideas, or had so many ideas that they didn’t know how or what to do with them.  It seems that the initial boundlessly unrestricted concept found some restrictions. I understand it’s a challenge to bring a concept successfully from mind to fully realised fruition and the first half of this album had me hooked and emoting like a loon, however, what ever concept Primus wanted to deliver, I feel was lost in translation, or simply not achieved at all. Tracks 5. 6. and 7 are lacking in form or structure.

The story that pulled me in and dragged me along despite my better, uneasy judgement, has become thin and insubstantial against the background of ambient noise and less than imaginative structures. I’m glad I took the time to listen to The Disaturating Seven, as the first part of the journey was worth every second, because there is nothing better than music that makes you feel something, even if that feeling is deep unease. 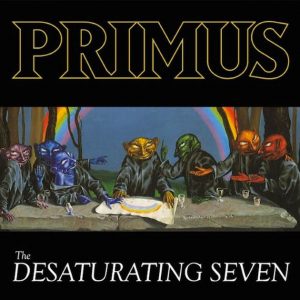 You can buy The Desaturating Seven by Primus here