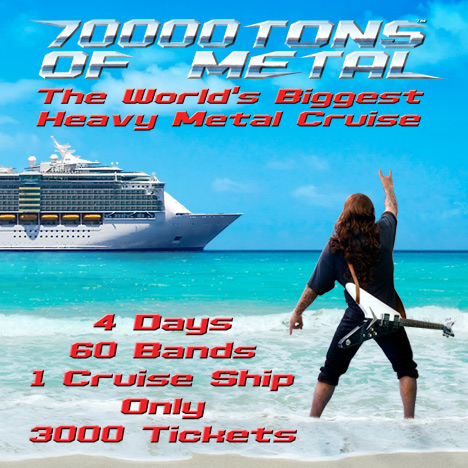 70000TONS OF METAL™, The Original, The World’s Biggest Heavy Metal Cruise, has announced the Public Sales date and the first 28 of 60 bands for their ninth voyage, sailing January 31 – February 4, 2019, from Miami / Fort Lauderdale to beautiful Labadee and back.

Only 3,000 tickets will be sold. Prices start at USD 766.00 plus Taxes and Fees per person and includes on board accommodation, access to all performances, meals, and numerous special events including meet and greets with all bands on board.

Sales for 70000TONS OF METAL Survivors (festival goers who have attended the event before) began on September 5, 2018, so limited tickets remain. Visit 70000tons.com/booking to book your cabin before they are gone.

As is customary for 70000TONS OF METAL, some of the bands will have very special performances on board:

That’s not all! There will be some more very special performances announced… SOON! For up-to-date lineup additions, please visit: 70000tons.com/artists