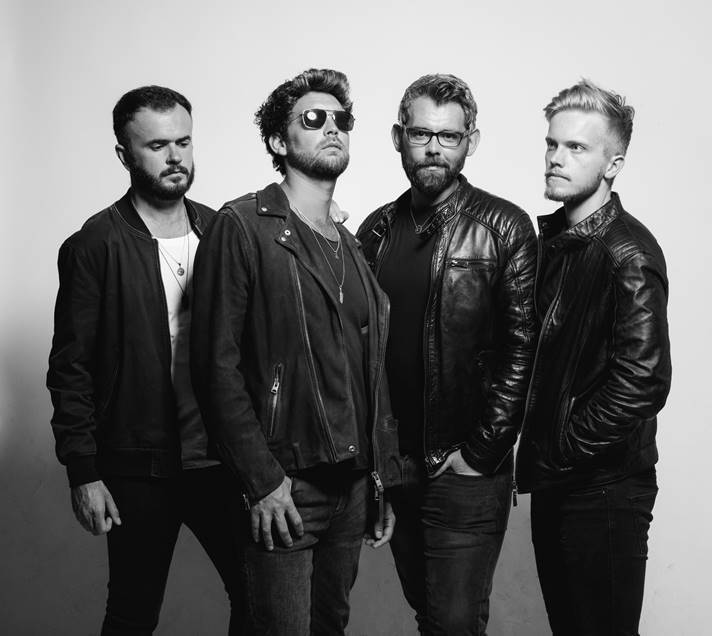 The rising rock ‘n’ soul-inspired Rainbreakers return to the fray, bearing impressive new material, and adding it to their repertoire. Their return is heralded by their new single ‘Ashes’, taken from the band’s forthcoming new album to be released in 2021.

“Built around the persuasive vocals of Ben Edwards, the urgent guitar of Charlie Richards and a skintight rhythm section, ‘Ashes’ is an exciting, original piece… to grab newcomers to Rainbreakers by the collar,” writes respected journalist Paul Sexton.

Rainbreakers — Midlands-based, four-piece band, brimming with creativity, talent, not to mention’s Charlie’s award-nominated guitar mastery — have been consistently pleasing ears and firing up fans’ hearts and minds during their remarkable rise over recent years.

“’Ashes’ has been a long time coming,” admits frontman Ben Edwards, “and to be honest there were times last year where I wondered if it would ever see the light of day. Thankfully though, we are here now and we can’t wait for our fans to hear it!

Turning to the single, he says, “’Ashes’ is about feeling held back. Right now, the whole world is feeling that way, but this is only the beginning of the journey. Our song showcases the feelings of someone who has been thrust into a world where they are underappreciated and neglected by the system.

“Society can force people fit into certain moulds. This song explores how it feels for someone to be disregarded by their society because they do not fit the templates imposed on them; or, at least, how those aspects of a personality can feel oppressed by a system that just doesn’t care.”

Paul Monkhouse, reviewing the single for Metal Planet Music called it “A cry to be recognised, this is as powerful lyrically as it is musically.”

“Making the video was crazy with all the lights flashing around us!” Ben admits, with pride in the band pushing its frontiers, creatively and technically, “This has to be the most creative video we have made and we really believe it does the song justice. It showcases feeling held back, either by something within yourself that you no longer need to hold on to, or by the world around you.”

Directed by the incredible Morgan Tedd at Erase Creative, the video bathes the Rainbreakers in red then blue light, cutting between them and a man literally at the end of his tether, dragging a deadweight behind him, giving the themes of the song vivid and physical form. All to Charlie’s addictive riffs, Ben’s engaging vocals, and Ash and Sam’s spot-on bass and percussion.

Musing on the meaning of ‘Ashes’ and its accompanying video, Ben reflects, “It’s like you have been carrying the weight of the world on your shoulders then suddenly realise that you no longer need to bear that burden. Then the anger and frustration you can feel, when no-one has told you or shown you that the deadweight that you carry is no longer needed, or was never needed in the first place. Hopefully, finding a way to break free.”

Rainbreakers were voted for and awarded Band of the Month this month on Great Music Stories. You can also find a feature interview with Ben about ‘Ashes’ on GMS’s website. And there’s more: ‘Ashes’ has been earning airplay on Wyatt Wendel’s show on Planet Rock.

Rainbreakers kept the initial roll-out of the single very special, very exclusive, and very tangible, as it was only released on Limited Edition 7” Vinyl, with just 500 copies being pressed and printed. As an extra incentive, an exclusive signed photo was included with the hand-numbered and signed vinyl, making it even more collectable. Delighted fans have proudly been posting photos of their copies on the Rainbreakers’ social media, often on their honest to goodness turntables.

‘Ashes’ gets its official digital release across all major platforms on 26th February 2021.  Enjoy the excellence!