Beasto Blanco, the band fronted by long time Alice Cooper bassist Chuck Garric, will release “Live From Berlin” on January 19, 2018 via Rat Pak Records. “Live From Berlin” was recorded at the Mercedes-Benz Arena in Berlin, Germany during the 2016 sold-out Böhse Onkelz tour. The Release features songs from both their debut release “Live Fast Die Loud” (2013) as well as their highly successful 2016 self-titled sophomore release “Beasto Blanco”. Front-man Chuck Garric comments, “It was an honor to be invited to tour with the legendary Bohse Onkelz. Every show was sold out, every night a feast of Rock ‘n’ roll. The music was loud the crowd was louder! Berlin was a special night and we want to invite you to the party!” Calico Cooper adds “Beasto is a band that’s driven by the crowd. The more they scream for it the more we give it and Berlin was howling, it was an electric show!” and guitarist Brother Latham adds “Blood, and sweat, it makes for any great story…this one, for sure will be written in the books. Berlin knocked us up beyond our wildest potential, living up to our motto “Live Fast Die Loud!”

Influenced by bands such as White Zombie and Motorhead, Beasto Blanco’s music is a potent mix of heavy riffs, driving bass and melodic choruses. “Live From Berlin” is available for pre-order in various bundle configurations including vinyl, cassette, deluxe jewel case, hand autographed and an Ultimate Fan Bundle where you can receive a personal phone call from Chuck Garric! 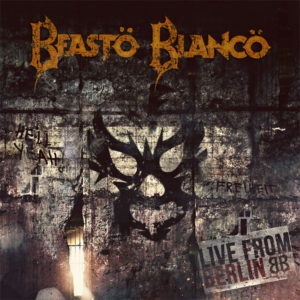 Don’t forget, you can catch Beasto Blanco on tour & purchase tickets for dates BELOW