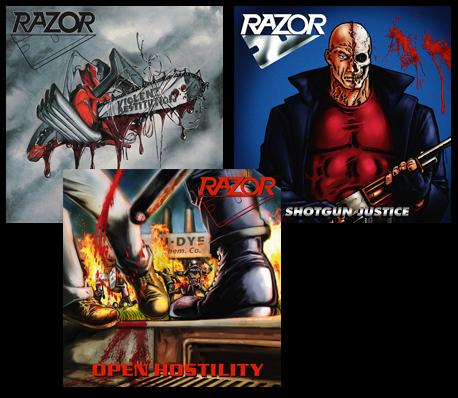 I’ve a confession to make.  Prior to getting my hands on these 3 re-issues, I’d never heard anything by Canadian speed / thrash metal band Razor.  For some reason these guys just passed me by – probably because back in the day I was spending all my money on albums by the bigger more well known bands.  Thankfully, Relapse Records have reissued these 3 long out of print albums, giving myself and others a chance to hear these “classic” albums and make up for missing out all those years ago.

First up is 1988’s Violent Restitution.  This album is a full speed aggressive thrash fest that perfectly combines early Slayer with a crossover / punk sound – the end result is an album that despite being 27 years old (!) actually sounds like it’s offering something a little different.  The riffs on this album are amazing, and if you’re going to try and headbang along to this make sure you’ve booked yourself an appointment with a neck specialist because the album is fast as fuck from start to finish.

1990’s Shotgun Justice is the Razor first album with vocalist Bob Reid (replacing Stace McLaren) and is more of a straightforward thrash album.  The speed and energy are still there, along with the impressive riffs, but the crossover sound has disappeared.  That’s not necessarily a bad thing, as it sounds like a natural progression for the band, and the album still delivers everything a thrash fan would want with no filler or pauses to let you catch your breath.

1991’s Open Hostility continues in the same vein as Shotgun Justice, but has a more polished sound.  Again, the tracks on this album are all relentless 100 mile an hour thrash fests, with no sound of mellowness creeping in.  Interestingly, due to the band’s drummer, Rob Mills, being injured in a traffic accident, the album was recorded using a drum machine – and for the most part that works, but there are a couple of places in the album where it does jar slightly.

If you’re a fan of old school thrash metal then you really need to get yourself these albums – all 3 are full of first class thrash metal and worthy of the label “classic”.  Not only that, but all 3 have been completely remastered, come with super deluxe packaging, and include a whole bunch of previously unreleased bonus tracks.  Check out the links below and order your copies today !! 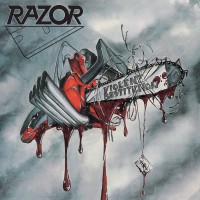 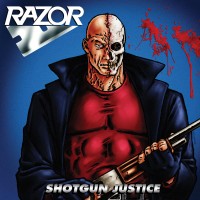 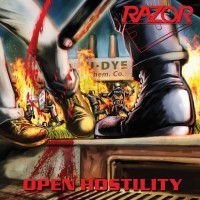