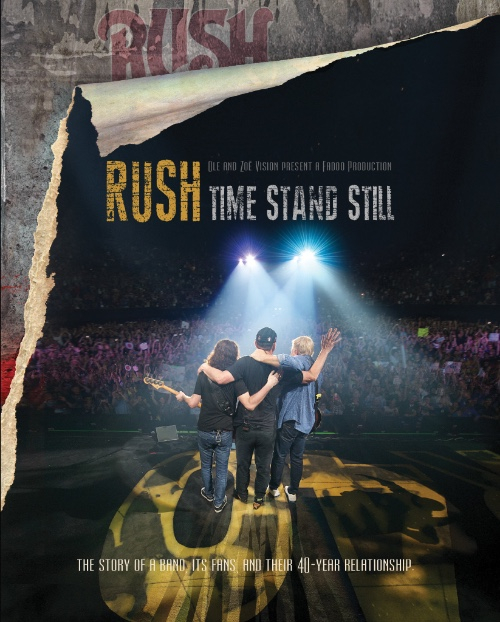 On November 18, 2016, Zoë Vision, a division of the Concord Music Group, in partnership with ole, will release Rush | Time Stand Still, a feature-length documentary film that provides an intimate look into the legendary rock band’s sold-out 40th anniversary tour – possibly their last — and the unique relationship Rush has with their devoted fans.

With more than 40 million records sold worldwide (with 24 gold, 14 platinum, and three multi-platinum albums to their credit), and countless sold-out tours, Rush – comprising Geddy Lee, Alex Lifeson, and Neil Peart – remains one of the most popular, inventive and influential groups in rock history,

During Dave Grohl’s rousing speech at the band’s induction into the Rock and Roll Hall of Fame in 2013, he noted,  “Rush built their following the right way. No hype, no bullshit, they did it from the ground up. Their legacy is incredible and their influence undeniable.”

Writing in Rolling Stone a few years ago, critic Chris Norris summed up the renowned rock trio’s artistic vitality by observing, “It’s true that Rush doesn’t mean today what it did in ’76 or even ’96. It may mean more,” and that still holds true today, as evidenced by their fans’ singular devotion to the band.

In 2015, Rush embarked on 35-city tour to commemorate their 40th anniversary. At the time, the R40 tour was rumored to be their last  – an end to Rush’s life on the road together. Rush | Time Stand Still follows this farewell journey. Exclusive behind-the-scenes access to the band and crew throughout the tour provide the raw and vivid emotional undertones of this feature-length film, directed by Dale Heslip, and produced by Allan Weinrib,  the team behind the band’s live concert films, Rush: R40 Live (2015) and Rush: Clockwork Angels Tour (2013).

At the film’s core are Rush’s ardent fans, and their undying dedication and loyalty are on full display as the R40 tour comes to its conclusion at the “Fabulous Forum” in Los Angeles. Their personal stories highlight the importance Rush holds in their lives, and the lasting impressions of their extensive catalog.  The members of Rush are quick to acknowledge the substantial role their fans have played in their success. Candid interviews with Lee, Lifeson and Peart bring Rush | Time Stand Still to an emotional conclusion for a band that built their career the old-fashioned way: one show at a time.

LIVE FROM THE RABBIT HOLE