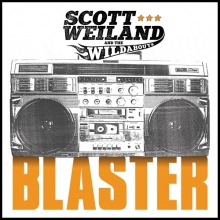 The two-time Grammy winning, multi-platinum selling songwriter/vocalist Weiland proclaims: “I wanted to make a rock record. It all just came together. It’s got a distinctive sound, but it also can entice those Stone Temple Pilots and Velvet Revolver fans who have stuck by me. What we’ve come up with is really heavy, slinky, and sexy. There’s a lot of fuzz. The best way to describe it is ‘Furry’.”
Fuzzy is more appropriate. There’s more fuzz on this album than on a freshly spayed female cat.

Weiland declares, “We chose a boombox for the cover because the image and sound are retro, but modern and, always, LOUD.”

Modzilla kicks off the proceedings with some serious funk laden bass & a really catchy vocal.
https://www.youtube.com/watch?v=jRCwjfvml0o

The Way She Moves is inspired by his wife Jamie Wachtel who he married back in 2013.

Amethysts intro is obviously influenced by Pete Townsend & The Who

There are a shed load of influences throughout this record. Even a nod to T-Rex via a cover of 20th Century Boy which given the amount of fuzz on this album is no real surprise and it shows off the remarkable talents and musical chops of what is going to be a really good live band. Scotts signature croon suits the track well.

Speaking of Weilands croon he has never sounded so good.

The albums closer Circles is very reminiscent of Bob Dylan along with Simon & Garfunkel and shows a softer side of Scott that is very rarely heard.

I’ll be totally honest I was expecting a little bit more in your face Weiland considering the 7 year wait for new material.

It’s an incredibly grown up album & a rebirth of Scott Weiland. But if you’re a bit of an audiophile it will all sound familiar even with Weilands trademark vocal.

Having said that, the whole album does grab you like a shag pile carpet holding on to a toenail.

The album was produced by Rick Parker (Black Rebel Motorcycle Club), and recorded throughout 2014 at Lavish Studios in Burbank and at The Sandbox in Beachwood Canyon.

“Blaster” features twelve tracks, all but one were written by ex-Stone Temple Pilots singer Weiland and it’s a toe tapper as opposed to a full out rocker. It’s very commercial & incredibly rock radio friendly.

This album from the voice of The Stone Temple Pilots & Velvet Revolver is due to drop 30th March 2015 via earMusic.

Scott Weiland and the Wildabouts play the following UK show.

Tickets are available from