Those forever denim clad rockers Status Quo have announced that they are to radically cut back on their touring activities and will only perform a series of summer shows and festivals during 2018. For the first time in around thirty years there will be no traditional Quo winter tour of Europe or Christmas shows in the UK.

As a result, the show already announced for 3rd November 2018 at the massive Hallenstadion in Zurich has been rescheduled for 6th October 2018 and will be the final Quo gig of the year. All tickets for the original date will be valid for the new date and ticket holders do not need to take any further action.

The forthcoming Australian tour and the ‘Plugged In: Live And Rockin’!’ UK Tour will be the only opportunity for fans to see the band in smaller and more intimate venues for at least two years. Additionally, as a tribute to the late Rick Parfitt, the Quo setlist at these dates will now include two of his best-loved classics, ‘Don’t Drive My Car’ and ‘Little Lady’.

“This year has been one of change and reassessment following the sad death of Rick,” commented Francis Rossi. “Although Rick had already retired from touring for six months before he died, it was still a major shock and my immediate reaction was to honour existing contracts and then knock it on the head.

“However, since then I have become increasingly confused as I realized just how much I was enjoying touring with two vibrant young guys in the band in Richie Malone [guitar] and Leon Cave [drums]. They’ve given us old guys a good kick up the backside and whilst it could never be the same as with Rick in the band, it is different now but in an exciting and vibrant way that I can’t fully explain.

“The 2017 gigs have been absolutely incredible and spirits are high, but we do now need some thinking time to consider all of the options now on offer for 2019, which could well include recording a new full on Quo rock album!

“We would love as many fans as possible to come and really help us make some noise on this year’s dates as we definitely won’t be touring in 2018. This is a massive change for us, and I know that the Quo tour has become a traditional part of the festive season for many fans.”

Status Quo have performed well over 6,000 live shows in their career, travelled millions of miles, entertained tens of millions of fans and spent nearly a quarter of a century on the road and away from home. It’s time to take stock. The Winter Tour of 2017 is not a farewell but it will be the last time to see this legendary act touring the UK in their traditional manner for the immediate future.

Back in July, Quo released a show recorded at the O2 Arena in London, called ‘Status Quo – Last Night Of The Electrics (Live At The O2 Arena, London)’. It’s available in the following formats from all good retailers: 2CD, DVD, Blu-Ray, an earBOOK (with 2 x Audio CD, 1 x DVD & 1 x Blu-Ray, coffee table book including approx. 120 pages) and Digitally. 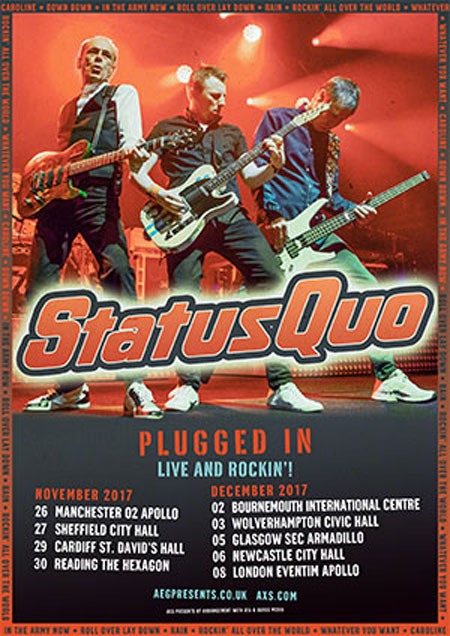