Tear Out The Heart – Violence 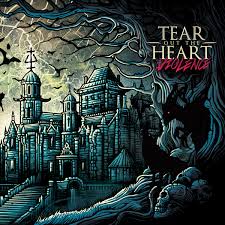 Tracks to purchase: Any of them – you will not be disappointed

Ok, before i start this review let me just say that I am not a huge fan of metalcore (just ask my colleagues Chris and Claudette!), it has to be my least favourite genre of the 'metal spectrum' – I am more Thrash, Death, Melodic Death, Hardcore & Punk. Now with that out of the way here comes the review!


I received an email from one of my contacts within Victory Records basically telling me to check out the new album they had sent me by Tear Out The Heart. I would love the album was the jist of the email. I read a little about the band and found that they had not long been signed to Victory Records and they combine sinister vocals with elements of hardcore and metal. Violence is their debut album which features guest vocals from Caleb Shomo of ATTACK ATTACK and Dan Marsala of STORY OF THE YEAR as well as being produced by said Mr Shomo.


So, up until I read "…they combine sinister vocals with elements of hardcore and metal", I still wasn't convinced I was going to enjoy it, purely because of the Metalcore genre (I probably have a few people telling me to fuck off at this moment in time but please bear with me on this one). The first track on the album Dead By Dawn (for all you Deicide fans out there, this is not a cover song) starts off with a nice short intro which then makes way for a brutal breakdown, normally I am not a fan of the breakdowns but in this case it works and the reason why it works for me is because Tear Out The Heart also break into a softer, melodic style of metal with crisp clean vocals (almost reminding me of Good Charlotte – I said almost!!) and excellent musicianship.


The same formula is used on the rest of the album – and rightly so, if it works then don't fix it! The whole album is really good effort, the band are very talented and will definately be a big name off the back of this album. What I would like to see on their future releases is some guitar solo's, the band are clearly talented enough and capable of solo's so why not go that bit further?


Am I now converted to the Metalcore genre? No and probably never will be, having said that, I am more than happy to go out and purchase this album, which I will be doing!