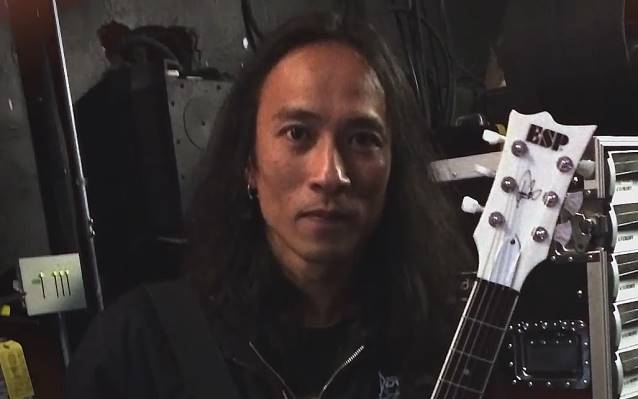 I know you’re in rehearsals & pre production right now & mega busy so thank you for taking time out of your schedule to talk to me.

Death Angel have the Thrashumentary DVD coming out later this month. What was the idea behind it? 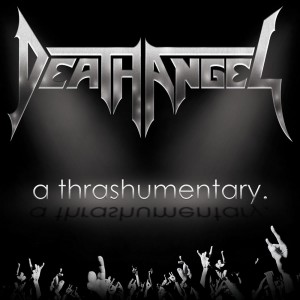 We became really good friends with him & he came out on the road with us & started filming. He had this idea that we try & release some live footage coupled with some behind the scenes shots. When we saw it we loved the footage so we pulled a complete 180 on him & basically said “why don’t we just release a documentary of the band from the beginning to now?”

It’s been a long process. We were on tour with the Relentless record for like 3 years &we were getting footage in from the early 80’s til now. Obtaining so much footage along with interviewing other bands to do a commentary. It was taking forever (laughs).

Right about then we had started work on The Dream Calls For Blood album so we had to push the Thrashumentary onto the back burner for a little bit or that album wouldn’t of come out on time.

As we were recording that album we were still obtaining a massive amount of footage & interviews etc.

So right around December 2014 we had some time & decided that before we get into writing the next record & the touring cycle we thought it would be a good time to get it done & released.

Things happen for a reason & it took a while but now it’s finally going to come out.

Death Angel reformed back in 2001 & played an amazing set at the London Astoria which was part of the No Mercy Fest.

That was a great day, Pro Pain, Nuclear Assault, Marduk, Testament, Malevolent Creation & a hell of a tour.

What I remember most about that Astoria show was the venue having to open the balcony back up because of the sheer number of walk ups. They really thought thrash was dead in the UK. That day really proved a point that this genre of music was alive & well.

To bad the London Astoria is not there anymore as to play there was such an achievement & a dream for me.

After that tour you came out with the first album in 14 years The Art Of Dying.

I’m very fond of that record too . It was my first with the band & it was cool to see how Death Angel kinda worked & how they write. I had been a fan since the 80’s & it was great to see all 4 original members re-discovering themselves & getting their feet wet on how to be Death Angel again. That record will always have a special place in my heart & for it to be the comeback album it really did the job and I’m looking forward to playing Thrown To The Wolves as it’s probably the thrashiest track on the record.

We were just getting into the groove straight after the Art Of Dying. We went into studio 606 which was owned by Dave Grohl (Foo Fighters & Nirvana) & having Nick Raskulinecz (of Rush fame) produce & mix the record was a great experience. We had written the songs & Nick came up to the Bay Area to our rehearsal room & checked us out. Before we actually started the recording session for this record we went down to Los Angeles & did some rehearsals with Nick. It was a great experience & we all learnt so much from going into a major recording studio, pre-production & of course the recording itself.

Sadly, it was around this time that founding member Dennis Pepa decided to leave & Sammy Diosdado came in for a while to fill in bass duties on the tour.

Yeah he stepped in & helped with the touring cycle & then from outside commitments he decided to leave. It’s not easy touring these days with having family. Being away from your loved ones for a prolonged period of time is hard. You know touring doesn’t suit everyone but you won’t know until you actually go. It may look fun from the outside looking in but once you get out there, that’s the true test of whether you’ll like it or not.

Personally speaking when I was out on tour last year, I think I was only gone for around 3 weeks but that was the longest I’d ever been away from my missus in the 8 years we had been together at that point.
Once you step into the realm of being on the road it’s a completely different animal. It’s a lot different from playing local shows & recording an album to suddenly being miles from home.

You had 3 years of touring with the Relentless Retribution record how did you cope when you came off the tour after being away for that long?

Luckily on that tour we had like 1 or 2 weeks off every so often to have a bit of a break but that’s not enough time to really decompress. You’re just starting to get acclimatised to being home & then you have to split. Everyone has their ways of decompressing when they get home but we’re all pretty conditioned on how to balance touring life with real life that we’re just so used to it.

It was hard but it was necessary to do it for that record cycle.

Death Angel had been a bit of a revolving door with members coming & going up until 2009 when Will Carroll (drums) & Damien Sisson (Bass) joined.

It was quite a whirlwind 3 years & the members that went out at the start of that 3 year stint is still active & we did the This Dream Calls For Blood album. It says a lot when the 5 members come back after a 3 year tour that they’re still into it & ready to carry on & to do another record.

Is there anything in particular that stands out from those three years on the road?

I have some fond memories from that tour. We did Thrashfest with Kreator, Exodus & Suicidal Angels which was great. The first time we went to South America to start the touring cycle for that album was exciting. We did 3 legs in the US with Anthrax & Testament. We did a lot of great shows with a lot of great bands & great festivals it’s kinda hard to remember just one in particular.

We got to play with Metallica when they did their 30th anniversary at the Filmore. We did the closing night. For them it was a pretty intimate setting & it was just us & Metallica playing to their fan club & that was a real fun night.

What has 2015 left instore with Death Angel?

Obviously we have the Thrashumentary coming out & with that comes The Bay Calls for Blood, a live CD which was recorded in our hometown of San Francisco.

We’re coming to the UK & Europe for some dates with Queensryche after which we get home around August 13th & take a couple of weeks off to decompress. Then around September 1st we’ll head into the rehearsal space to continue writing & start pre-production on the new record & around October 1st head into the studio to start tracking the record.

Have you got much already written for the new album?

About halfway there. We have 6 songs in various stages of completion. Mark is still working on lyrics as we try & flesh out the skeletons of the tunes that we have. We’re going to take every opportunity on this European leg of the tour to continue to take the riffs that we have & continue to develop on those & finalize them when we get home.

There’s no lyrics as yet for any of the songs so we’re not looking at debuting anything. We did think about if a song was ready enough to may debut it live. We were going to do that for the This Dream Calls For Blood record but decided not to because once you play a song especially with YouTube, everything gets captured with shitty quality video & audio. But the song could change, some bits may work live & other bits don’t so you chop & change things. So by the time the new record comes out people may judge it on what they’ve heard the time you played it live to the new recording. So we’ve just decided to wait until the record comes out like the old days (laughs).

Any new gear being used for the tour?

I’m bringing over a couple of new custom ESP guitars which are all white. Myself & Rob are bringing 4 guitars each as we have 2 different tunings for the set & it’s always good to have a backup. I play ESP through Mesa Boogie & Rob plays the Jackson Dragons through Angles that we’ve been using for many many years so the only thing different are the new custom guitars we’re bringing.

Continuing on from tour stories etc, when was the last time you were starstruck?

I fanboy out a little bit but I’m kinda like don’t wanna go & bother the person as they may be having a bad day or just don’t want to be bothered. You know everyone has a bad day which is not their fault or they’re just not up for meeting anyone that day I don’t want the first impression to be a negative one.

Maybe if it was like an actor or actress from Game of Thrones that I’m really into at the moment & bummed that I have to wait another year for the next season, it may be a different story.

Ted, I appreciate your time & it’s a been a pleasure to talk to you.

Thank you for taking the time out of your day & have a good tour. 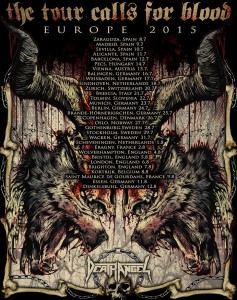