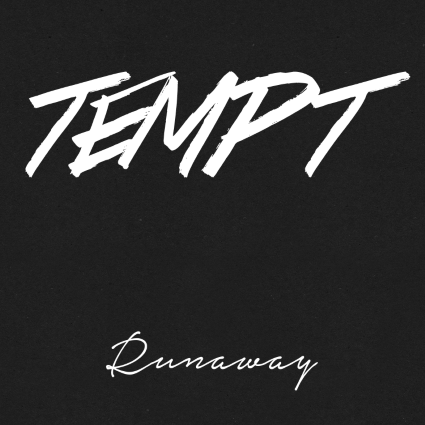 Prepare to be Tempted: NY band Tempt Release Their Debut Album ‘Runaway’ in the UK

Formed in New York City, with an astonishingly young yet accomplished line-up, Tempt set out their stall in magnificent fashion and deliver the goods, as their full-length debut album ‘Runaway’ (released this week on Rock Candy Records) shows. In a word, respected music journalist Malcolm Dome of Classic Rock describes ‘Runaway’ as “Brilliant!”.

Tempt take compelling contemporary rock as their touchstone and foundation, but also keep one foot confidently in the past, drawing on the feel good classic rock of the 80s, lending their music an undeniably retro feel. This combination of new and old gives Tempt a sound and swagger that combines the cut and thrust of modern rock (like Rival Sons and Foofighters) with the blazing pride and passion of vintage arena rock (think Van Halen and Def Leppard); a staggering achievement in this day and age.

Gigging locally, but focussing on writing and recording, Tempt have thrown convention to the wind and assembled ‘Runaway’, one of this year’s most arresting releases.

It’s an album that concentrates on the vital ingredients of any modern day contenders, filled with songs that have stupendous (but not syrupy) melodies and big, beefy hooks. Crucially, all the parts are in place, including Zach Allen’s great vocals and Harrison Marcello’s incredible guitar playing; all wrapped up in arrangements with enough twists and turns to not only satisfy the musically-minded, but to also reach out to those who just wanna rock. “We’re not ashamed to just let things rock, to have ripping guitar solos and have amazing vocals and songs with huge hooks,” offers guitarist Harrison Marcello, by way of explanation. “We want to have people sing along and have a good time at our shows.”

“Our music is fun. We’re not Neanderthals, angry at the world,” clarifies vocalist Zach Allen. “That doesn’t mean we aren’t socially or politically aware, but we are young and we are excited about life. Our music does have an edge, but that edge comes from growing up in the streets of NYC.”

Issued physically and digitally from last Friday June 17th, via Rock Candy Records, the fifteen track album is nothing short of a call to arms for hard rock fans on the lookout for a new and mind-blowing wake-up call. With tracks such as ‘Under My Skin’, ‘Comin’ On To You’ and the quirky ‘Neuro-Child’ leading the charge and bashing down doors, who could argue the point? Oh, did we mention the super-charged ‘Aamina’? Well, it would be rude not to.

In an effort to recruit as many believers as possible, Tempt will descend on British and European soil later this year, looking to solidify their offensive and take no prisoners. The warning shots have been fired: either take cover, or climb on board for the thrill of a lifetime.