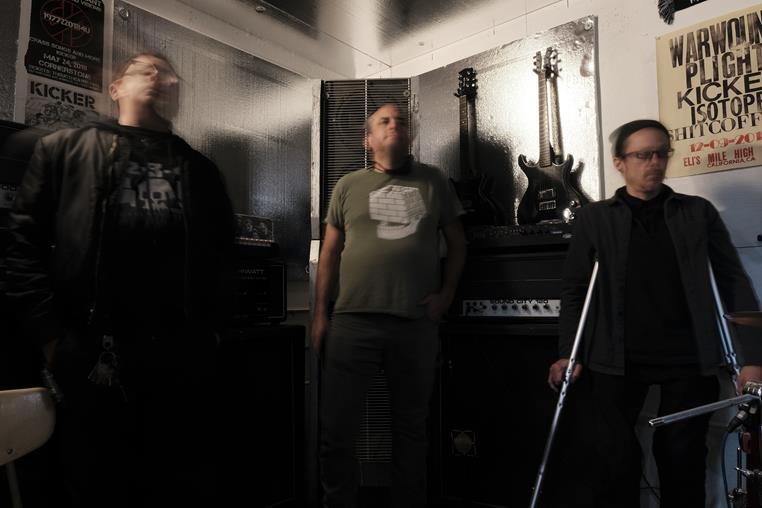 Tension Span unites Noah Landis (Neurosis, Christ On Parade), Geoff Evans (Asunder), and Matt Parrillo (Dystopia, Kicker). Using the musical language of their past, the dark punk of their early bands, Tension Span delivers a new album to Neurot Recordings that infuses classic elements of punk and post-punk, and sounds both urgent and personal, speaking truth to the bleak realities of today’s socio-political collapse, and the angst and identity crisis it brings. Somehow within the fabric of these themes of stress, fear and rage, there is a feeling of underlying hope, that there is something beautiful in the struggle.

Recorded during the isolation of covid-19, the trio crafted The Future Died Yesterday, a riveting album that sounds both varied and cohesive, combining musical and emotional heaviness with melody, samples, and synth. The album was recorded by Tension Span, mixed by Noah Landis, mastered by Bob Weston and Greg Obis at Chicago Mastering Service. With artwork by Neil Grimmer, John Yates, and Matt Parrillo.

Stream two tracks from Tension Spans debut including the title track “The Future Died Yesterday” and “The Crate Song” via Bandcamp. 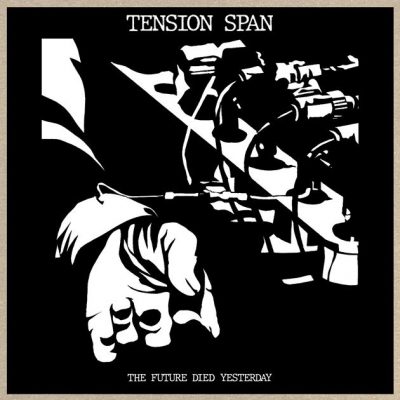 The Future Died Yesterday will be released on LP and all digital platforms through Neurot Recordings on September 30th. The LP jackets are screen-printed; a 3-panel fold-over cover, black and white inks printed on thick chipboard stock. Find preorders at the label webshop and Bandcamp.

Dystopian reality. Division and banality. We are what we tend to be, but are we what we intend to be?

In the eighties and early nineties, young punks gathered in Oakland, California’s abandoned urban spaces, shared punk houses, and small clubs to create community and raise their voices against the injustice and brutality that surrounded them. Complex images drawn on fliers were passed from hand to hand and posted on walls. Songs screamed out behind closed doors were captured on cassettes. The underground was a world of its own, a tightly knit cohort united by the need to transform rage into art, an emotional alchemy that was both earnest and reckless. A visual and sonic language emerged, and thirty years on, it still has the power to speak the truth.

Rungs on a ladder or bars on a cage? The only thing I feel that’s real is rage.

The members of Tension Span spoke this language in their early bands: Landis in Christ On Parade and Neurosis, Evans in Asunder, and Parrillo in Dystopia. These friends of several decades have created something new from the cloth that was woven in their youth. In a moment of complete isolation, separated by the global pandemic, Parrillo and Evans sent rough mixes of new songs to Landis and his mind began to reel with questions, transformed into lyrics.

Cracked society, cracks your mind. Am I invisible? Or are you blind?

Living in a society of constant negative conditions, how do we navigate this journey? How do we walk through this world and hold on to our idealistic intentions, kindness, and empathy through constant states of stress and fear? How is our mental health and spiritual health impacted by angst, anger, anxiety, depression, and trauma? What is it all for, how is any of this meaningful?

Drawing influence and inspiration from the dark punk and post punk of the late ’70s and early-‘80s, the sensibility and DIY approach of the UK anarcho-punk movements, and the energy and immediacy of the early-mid-‘90s Bay Area punk scene, Tension Span has created music reflecting the bleak reality of this time of socio-political collapse, increasing economic precarity, creeping authoritarianism, and viral, biological, and psychological pathogens that are decimating the lives of millions.

Ultimately, making meaning out of struggle is a profound act of hope. It is with this spirit and inspiration that Tension Span offers you a collection of twelve songs rooted in the past, caught in the present storm, and yearning toward a new day. The past is a story we experienced together, and the future remains unwritten.

FOR MORE ON TENSION SPAN: