Testament are thrilled to announce that they will be returning to our UK soil in June to play an extra two UK show dates in Oxford and London, as part of a four date long UK run. This run will take the thrash icons to Oxford, Leamington Spa and Southampton – culminating in a special Thrash’n’Bowl show at the Brooklyn Bowl, London. There will be special VIP/bowling with the band tickets available for this event!

“Testament are excited to be playing some club dates in England. It’s been a while since we have played some intimate shows there and we can’t wait.
Be ready for a great night of thrash metal!”
Testament have been working hard in the studio over the past year on the follow up to 2012’s ‘Dark Roots Of Earth’.
Their new record is due for release this summer via Nuclear Blast, stay tuned for more details…

There will be 96 VIP/bowling with the band tickets tickets available for the Thrash’n’Bowl event at Brooklyn Bowl. 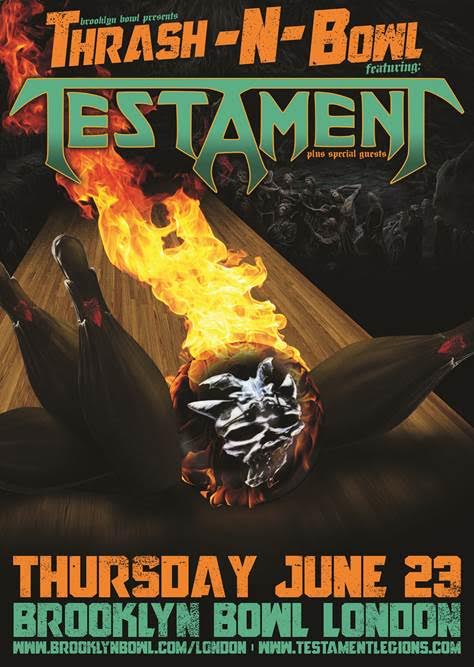 Following ‘Live At Eindhoven’, an EP recorded at Holland’s Dynamo Festival, ‘The New Order’ (1988) was very well received, producing one of the band’s most memorable classics ‘Disciples Of The Watch’. Next came the highly successful ‘Practice What You Preach’ (1989), then the release of ‘Souls Of Black’ (1990) coinciding with the famed European ‘Clash Of The Titans’ tour with Slayer, Megadeth and Suicidal Tendencies – which helped cement their place in thrash royalty.
Testament signed with Nuclear Blast in 2007 and have since released two critically acclaimed studio albums; ‘The Formation of Damnation’ (2008) and ‘Dark Roots Of Earth’ (2012).
Testament Links:
Website
Facebook
Twitter