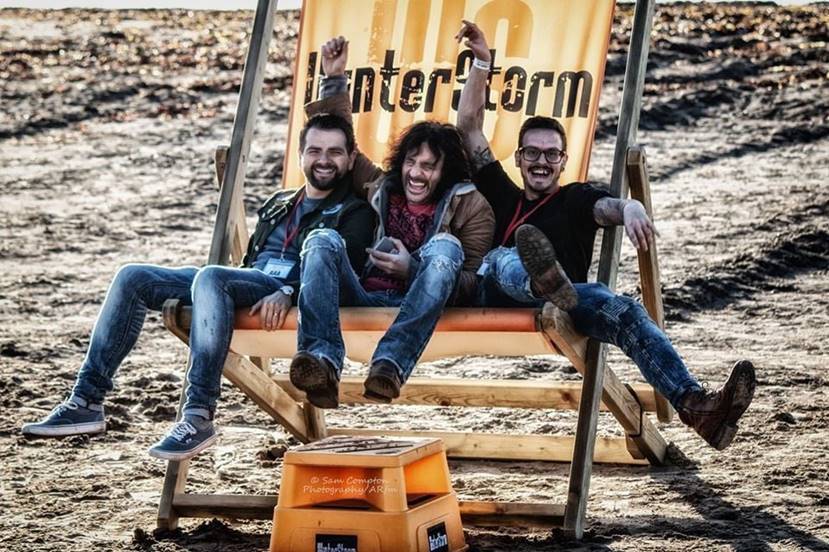 Country rebels The Outlaw Orchestra ride again and premiere the brand-new video for their single ‘Send Some Whiskey Home’: a track that is rich in country rock and sweet slide guitar that demonstrates the boys flexing a more mature direction in songwriting and performance.

The song has come to serve as the band’s calling card for their country blues roots and their unrepentant tongue-in-cheek lyrics, affectionately homaging the women (and dogs) who allow them to maintain their musicians’ lifestyle. This is a heartfelt love song between man, dog and whiskey.

Reflecting on ‘Send Some Whiskey Home’s origin and inspiration, the band admit that “The roots of this song can be traced back to Dave Roux spending yet another day watching back-to-back cartoons, with his dog (Ted) sat on the sofa.

“Dave’s good lady arrived home after a long day at work. Dave and Ted both looked at her and said ‘We’re starving: What’s for dinner?’

“She walked right on past them, sighed, looked back and said ‘I wish you loved me like that dog loves you!’ Dave looked at Ted, who was wagging his tail, and said “Pass me the guitar, boy, I feel a song coming on!”

When Dave Roux (guitars/lead vocals) played the tune that he’d hit upon to Pete Briley (banjo/lap steel/vocals), it fitted so well with lap steel that it was surely a match made in Heaven!

Dave toyed with the song in Long Beach California, sitting in with musician friends Trish Burke and Buzzy James of The Buzzy James Trio, Laidlaw; also the band M.O.B. (Michael Olivieri Band, whose lead singer cut his teeth in 80’s hair rockers LeatherWolf). Trish’s soulful gospel harmonies and Buzzy’s accomplished slide guitar (once revered by legendary guitarist, Eddie Van Halen, himself) “put the icing on the cake” of a song that has become a firm fan favourite.

The video was filmed at 6am on a frosty autumnal New Forest morning, featuring a special cameo by Dave’s dog Ted, who sets the benchmark for love and devotion in both the original remark and the lyrics.

2020 saw the band’s debut album hit the ground running, earning praise from many respected broadcasters and reviewers. Steve Beastie (Hard Rock Hell Radio) ranked ‘Pantomime Villains’ in his Top 25 albums of 2020. Mick Birchall Reviews named it in his Top 40 Albums of 2020 (just beating Chris Stapleton, whom The Outlaw Orchestra admit they dig!) whilst Rockposer put the album in their top 3 Albums of the Year. What’s more, looking forward, Metalplanetmusic have put The Outlaw Orchestra down as Ones to Watch for 2021.

“Somehow, from somewhere,” Rushonrock mused in amazement, “The Outlaw Orchestra have outshone the opposition. David Roux and his merry men have reinvented the wheel. They’ve rewritten the rock and roll rulebook.”

As MNPR Magazine observed, “To create a body of work as stylistically diverse as ‘Pantomime Villains’ takes talent, and to make it look as it if it was seemingly thrown together over a few beers, is pure genius.”

Check out The Outlaw Orchestra’s latest single and video release from that excellent album.

SUZI QUATRO releases new album “The Devil In Me” in March!