The Qemists back by popular demand, joined by Heck and Skint Circus

After an earth shaking performance at last year’s Breakout Festival, Brighton electronic powerhouse The Qemists are back by popular demand. Adding to an already diverse line-up, The Qemists will hit the stage alongside Deaf Havana, SikTh and many more this September.
Heck (formerly Baby Godzilla) have also joined the line-up and will bring their incendiary live show to the festival for the first time; blink and you’ll miss it! What’s more, Breakout has teamed up with Access to Music Brighton adding local’s Skint Circus to the already packed line up.
Deaf Havana – SikTh – The Qemists
We Are The Ocean – Martyr Defiled – Black Tongue –
Heck – TRC – By Definition
Zoax – Seething Akira
The Gospel Youth – Skint Circus

BBC Introducing will be giving local acts the opportunity to perform at Breakout Festival this month, details on how to enter will be announced soon.

Breakout is Brighton’s first and only outdoor heavy rock festival. It returns to Brighton racecourse on the 26th September 2015. Last year’s high profile artists included Skindred, Funeral For A Friend, The Blackout, Silent Screams and Betraying The Martyrs. The festival attracted over 2,200 fans in its first year. 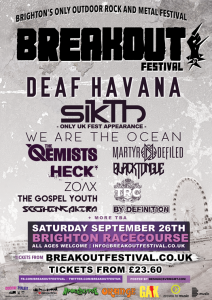