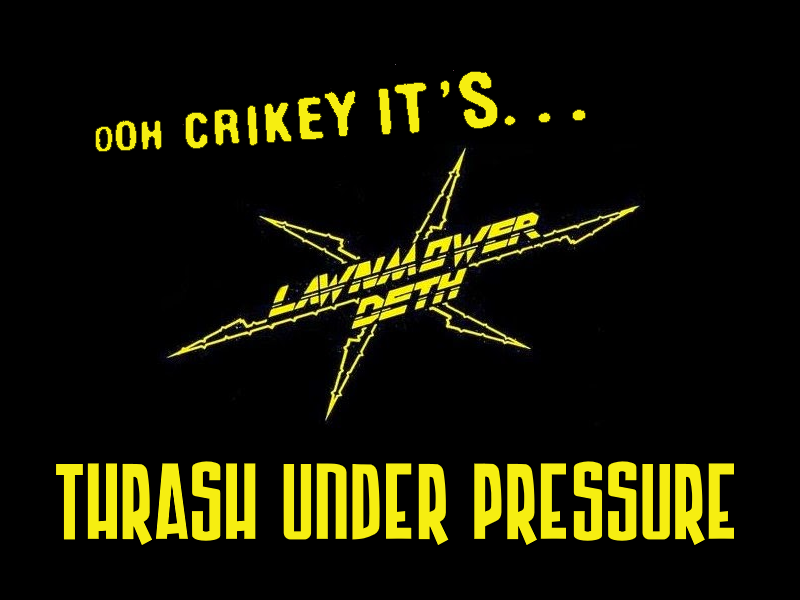 And so the journey through thrash brings us to another British band. This band are very keen gardeners and reflect this in their complex concept albums with multi-part songs about perennial plants, compost usage and the best way to bring on your brassicas. Yes, I’m taking the piss a little. This week is Lawnmower Deth.

According to Wikipedia: “Lawnmower Deth are an English thrash metal band who parodied the genre and recorded three-and-a-half albums. Initially active in the late 1980s and early 1990s, they reformed in 2008.”

That’s their history in a nutshell, but it’s a little unfair. “Parodied the genre”? Some of their lyrics were just for fun, admittedly, but there was nothing wrong with the music at all. Lawnmower Deth produced some of the finest thrash this country has produced and I’m not just saying that because a combination of Ooh Crikey, It’s Lawnmower Deth and lager helped me through sixth form college.

Their first official release was a split album in 1989 with Metal Duck. Lawnmower Deth‘s half of the album was called Mower Liberation Front and contained such serious songs as Thermo Nuclear War Is Good for Your Complexion, Drink to Be Sick and I Got The Clap and Me Knob Fell Off. Ok, they were having fun to a large extent, but listen to the riffs on Umph Umlah and Nasal Infection and you’ll experience a classic 80s thrash/hardcore/crossover blend.

The aforementioned Ooh Crikey… came out the following year and continued in exactly the same tongue-very-firmly-in-cheek way. There are songs about vampiric snooker players, alcohol-related spillages and exercise equipment belonging to the Devil himself. Musically Lawnmower Deth were improving and this is evident by their cover of Motörhead‘s Motörhead – one of the finest covers of all time.

The next studio album, 1992’s Return of the Fabulous Metal Bozo Clowns, was even better. Kev, formerly of Acid Reign, had joined them at this point and Lawnmower Deth were the thrashiest they had ever been. Yes, the silly songs were still there – Egg Sandwich is still a classic though – but the music was improving massively. They weren’t about to break into Big 4 territory, but they deserved to be bigger than they were.

And then what happened next almost ruined everything Lawnmower Deth had worked on previously. 1993’s Billy was a change of direction, to put it lightly. The entire album sounded like skate punk. I had no problem with the way it sounded, but it wasn’t thrash and this was no longer Lawnmower Deth. It led to poor sales despite there being some gems among its tracks. The band called it a day. What a shame.

But it wasn’t the end, as these things rarely are. Lawnmower Deth resurfaced during the noughties and began plying their trade at a series of festivals and headline gigs. They are as popular now as they ever were. They even had Kim Wilde onstage with them performing a few songs this year, including Kids in America. Strange but true.

Vocalist Qualcast “Koffee” Mutilator once said when asked if there would ever be a new album “I bloody hope not!” but the recording of a new song, I Am Cob, this year has fuelled speculation that a new long-player could be forthcoming.

Put them on your playlist: Spook Perv Happenings in the Snooker Hall, Illinois Enema Bandit, I Narcissus