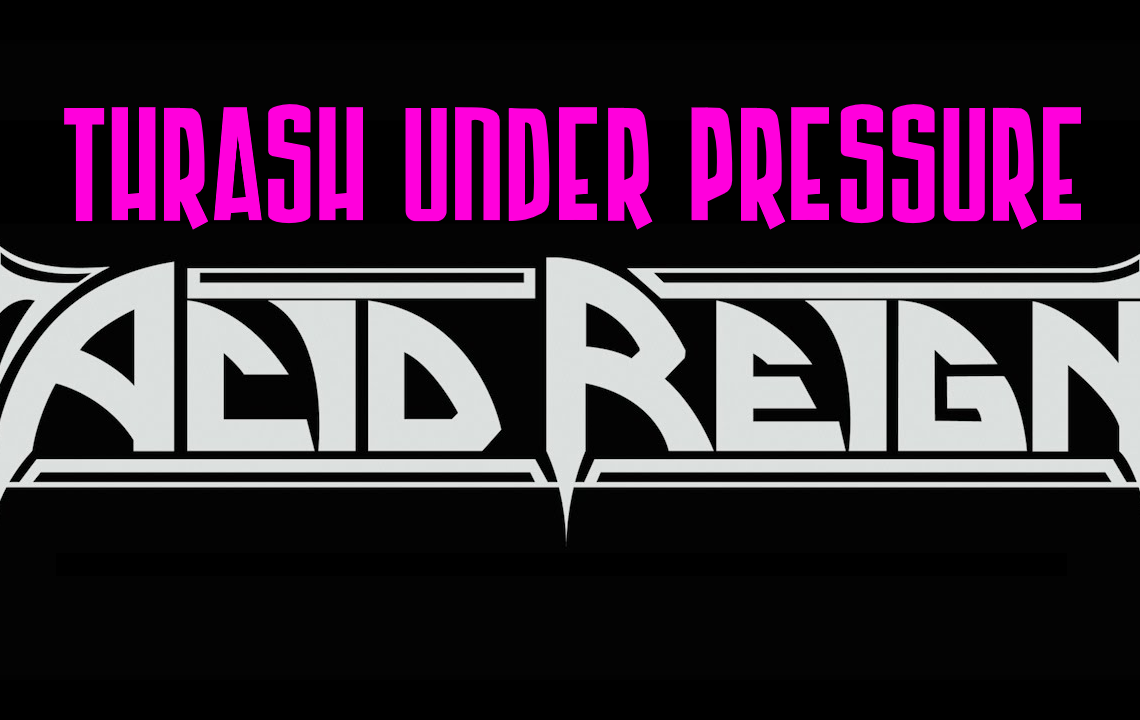 And so we arrive in good old Blighty. The thrash explosion that was going on in the rest of the world was taking off over here too.

In an age before the internet (imagine that) I was unaware of a band that were plying their trade so close to where I lived – Harrogate isn’t that far from Darlington and it’s certainly a damn sight closer than New York or the Bay Area.

We all used to trade tapes back in those days, but the first time I became aware of Acid Reign was when I heard Goddess on the jukebox in the Old Dun Cow in 1991 when I was only 16 (obviously being underage in a pub I was only drinking soft drinks and most definitely NOT Newkie Brown straight from the bottle).

This prompted me to raid their back catalogue starting at the very beginning. Luckily a record shop in Bishop Auckland I frequented was able to provide me with the lot.

1988’s Moshkinstein EP was the place to start. Let’s not forget this is a band who were signed to Under One Flag on the strength of their demo for this which tells you how bloody good it is.

The aforementioned Goddess kicks everything off and is arguably the best song on there, but the other tracks are all pretty damn decent too. Suspended Sentence would win the silver medal if I was forced to judge. It’s apparent that us Brits could thrash as well as, if not better than, our American cousins.

Speaking of American cousins, Acid Reign became mates with and toured with Nuclear Assault and Exodus. They were in the big league pretty much immediately.

The first full length release, The Fear, followed in 1989. What an epicly thrashtastic riff-fest this album is. Seriously. There’s not a duff track on it and this album became part of the soundtrack to my ill-fated time at sixth form college (along with Lawnmower Deth‘s Ooh Crikey… but more on that later).

The Humanoia EP came not long after, featuring a re-recorded version of the album track which was actually better than the original. A few live tracks finished it off rather nicely.

Obnoxious followed in 1990 and despite the poor reception it received (why? Just why?) it was another solid offering. Thoughtful Sleep is kind of like Acid Reign‘s One, but way better – there I said it. Not being quite as good as The Fear is far from failure, but the early 90s were a peculiar time for metal.

1991 was the end, as thrash wrongly fell out of favour. At the same time I’d discovered the band they parted ways with their label and disbanded, but only after the release of The Worst Of…. The album was a collection of demos, live tracks, forgotten recordings and two songs that were meant for an EP that never happened, The Joke’s On Us and Three Year War.

And that was that. Rumours circulated for years of reunions, but it never happened.

Until 2014. Acid Reign‘s Apple Core Archives was released. This was a 3 CD set of everything that they had recorded. Ever. A certain weekly publication which I won’t name gave this release a terrible review, claiming the band were “a joke” and that they had been a kind of holding area for future members of Lawnmower Deth and Cathedral. While there is truth that members joined both of those bands after Acid Reign was dissolved, they were in Acid Reign because they wanted to be in Acid Reign and because Acid Reign kicked serious arse. As for the joke comment, the band had a sense of humour, but the music was serious thrash and nothing else (except for the funky bit at the end of Codes of Conformity).

And soon after this, joy of joys, the band announced they were getting back together. It was a reboot with an 80% different line-up, but who cares? The square dancers were back!

Vocalist H was the only original member left, but in 2015 Acid Reign recorded a new track, Plan of the Damned. It was as if they’d never been away. The song is heavy as Hell and embodies thrash metal perfectly, proving what we all knew, that thrash never died, it just took a nap for a while.

The band are touring again and will there be a new album? Time will tell.

As for me, a twist of fate led to me moving to Driffield and I now live just around the corner from the site of the former recording studio where the Humanoia EP and Obnoxious were recorded.

Put them on your playlist: Goddess, All I See, My Open Mind