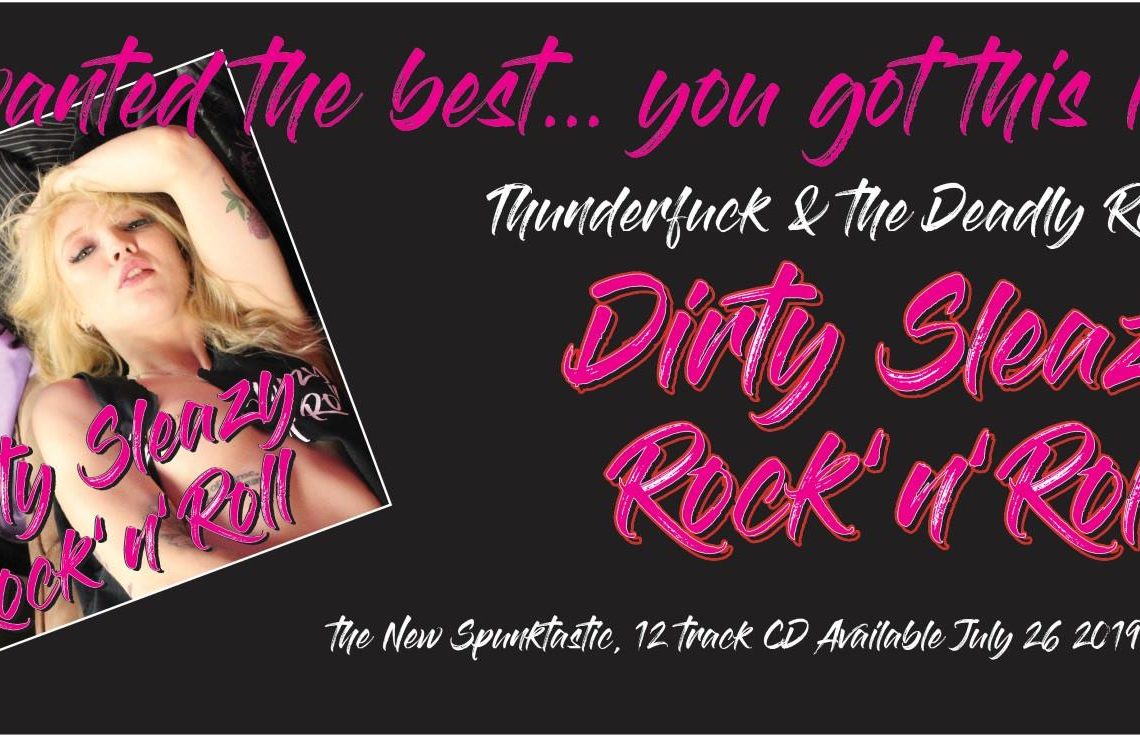 There’s this little saying that you may have heard of, that goes along the lines of ‘Don’t judge a book by its cover’. Essentially a precautionary metaphor, it suggests that while the outward appearance of an object or person may draw negative comments, you may find yourself pleasantly surprised by the inner beauty or hidden value of said object or person. With today’s review however, I very much went and judged this album by not only its cover and title, but even the name of the band, and to be fair, even my own admittedly bleak estimations were not so much as met, but majestically leapfrogged. Let me explain…

Let’s start with the band name and it’ll give you an indication as to where this is heading; THUNDERFUCK AND THE DEADLY ROMANTICS.  The band (Consisting of vocalist Thunderfuck, guitarists Johnny Douchebag and Jim McPain, bassist Ryan Cumsock and drummer George LegHumper ) claim to hail from Fuckplanet (Which apparently is now an unofficial name for Hamilton, Ontario) and we’re essentially met with two options here. Either this is purely a ‘comedy’ band and they’re all in gimmick, or, they’re STEEL PANTHER with even LESS of a filter and to be perfectly honest with you, neither option excites me. But, we persevere, and discover that the tagline for their newest album “Dirty Sleazy Rock ‘N’ Roll” is ‘You wanted the best…you got this instead’. Having absorbed all of that, I’d like to highlight another saying…’If you don’t have something nice to say, don’t say anything at all’…I guess I’m about to ignore that one as well.

The album opens up with “Drink This Party Dry” and we get some generic background noise of chatter as though we’re at the aforementioned party, before the guitars kick in with some honestly slick blues-rock riffs. It’s actually promising…hath the book cover deceived me after all? Of course it hasn’t, because as soon as the vocals kick in, most of if not all hope is gone quicker than Corey Taylor can tell you so. With all of the clichéd lyrics about drinking, partying, fucking and fighting, it quickly becomes more roll your eyes than rock ‘n’ roll, but at least the guitars are enjoyable. “I’m Not In Love” is a random one in all honesty…and every angle you approach this it fails. First of all, let’s acknowledge the Steel Panther similarities; songs about girls on the road, groupies, use and abuse them thirsty thots and all that gubbins…Panther AT LEAST have a cheeky, cheesy charm to their song-writing, everything’s with a wink and a nudge…not this band. Thunderfuck or whatever his name is comes across as a legitimate cretin…these lyrics coming from this man WILL make you cringe. Also what’s the beef with MOTLEY CRUE?!?

Speaking of cringing…there are another ten tracks to endure here so I’ll quickly run through some to save you the pain quite frankly. “Anal Annie”…aside from the semi-glam rock aesthetic I’d sooner shove butt-plugs in my ears than listen to that again. Big ones…all of the way in, meet in the middle like, Jesus Christ fuck me deaf. “Spray My Love” houses a classic SEX PISTOLS-esque punk tone but again lyrically it’s derogatory and awful. “Let’s Fuck” despite its genuinely up-tempo hard rock  delivery is ruined by a seriously out-of-key vocal pre-chorus and some more terrible lyrics…it actually makes the MURDERDOLLS song of the same name seem decent. Oh, and the totally original idea of including recordings of orgasmic moans on the track? Genius lads; let’s fuck? Let’s not…”Go Fuck Yourself” follows this with an unexpected soft-blues / acoustic piece…musically it’s a nice change to be fair but it’ll take more than that to win me over sorry. I’ll happily put my lighter in the air for a ballad for you, so long as in my other hand I’m holding a stolen copy of this CD, which I will burn, gladly. “Jaegerbomb” makes you wish you’d had double-figures worth to continue listening…before we finally close the album on “Me Too” and here is where the guys will likely cause most offence.

Essentially making a rib at the #MeToo sexual abuse movement in some sort of satirical manner I guess…but it’s just not funny. They’ve turned ME into a social justice warrior…let that sink in. Essentially as I wrap this up (Preferably with a condom)…”Dirty Sleazy Rock ‘N’ Roll” is exactly what it says it is and then some. The lyrics and their delivery are as I said cringe-worthy and horrendous to the point where it’s genuinely hard to categorise this album. While I can accept that a lot of this would be perceived as dark humour and tongue-in-cheek bad-boy rock…it’s at best thinly veiled. I honestly can’t decide if this is in character or not, and maybe that deserves credit in regards to their overall delivery and performance, but I’m not holding my breath. The most annoying thing? A lot of the instrumentation here is really slick and enjoyable…there’s some great guitar work throughout this record but it’s ultimately ruined by, well, this record. Thunderfuck And The Deadly Romantics…Thunder-fucking awful…avoid. 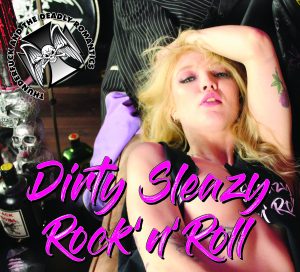 Release Date:
26th July 2019 (Out Now)
For all things Thunderfuck and the Deadly Romantics, click HERE and to purchase the album, click HERE