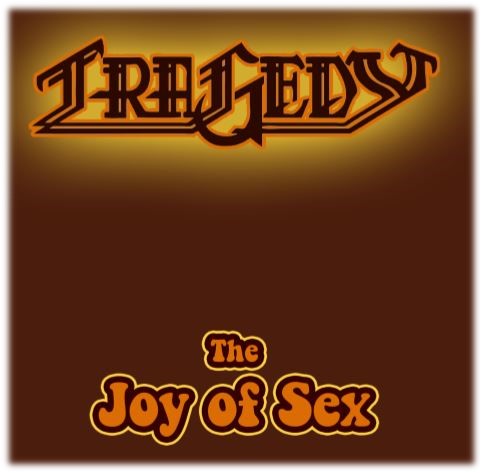 Having experienced Tragedy band live a couple of time (the highlight being Hammerfest. Singing Abba songs whilst in a mosh pit with Turisas is something that’ll be hard to forget) I’ve been waiting for this album for some time.

Tragedy are far from being a novelty act. These guys are, for want of a better word, GENIUS. They have tapped into the metal subconscious of 70’s disco & made it more accessible than a cola roasted chicken, & as a teaser, they released an absolute belter of Staying Alive.

This band has released 4 albums so far & each one gets better. Still primarily a Bee Gees tribute act, The Joy Of Sex sees them break into the realms of Madonna (Borderline),  Rick Astley (Never Gonna Give You Up) & Prince (Little Red Corvette)

To show a (somewhat tongue in cheek) serious side, the charity single Dear Santa (Bring Me a Goddam Gentleman) makes an appearance on this record as well.

If this album doesn’t put a smile on your face then you must be dead inside. If you find that you’re not, check How Deep Is Your Mum on their tour (details below)

Check out Tragedy & purchase the Joy Of Sex HERE