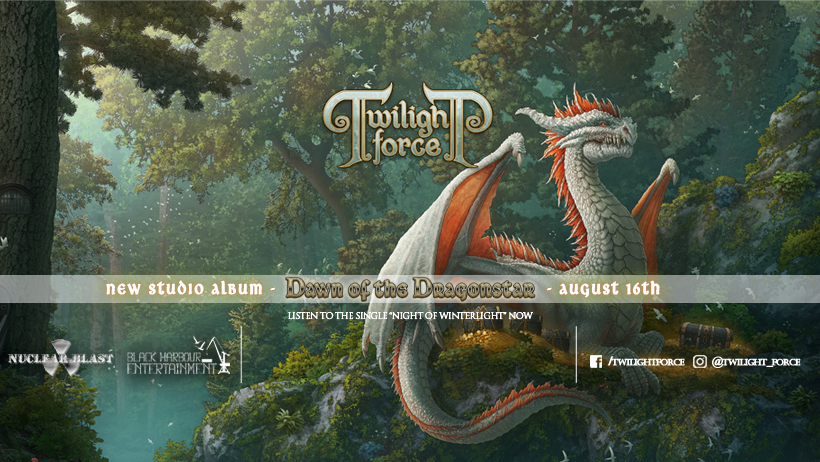 Twilight Force – Dawn Of The Dragonstar

Swedish symphonic power metal bards Twilight Force are set to regale us with their third opus of fables of the mighty Twilight Kingdom and will recite the tales of the ‘Dawn Of The Dragonstar’. We will be captivated and enchanted by tales of Kings and Queens, heroes and wizards, magical artifacts and ancient mythical beasts as Twilight Force guide us through the prophecies and history of the Twilight Kingdom.

The ten songs of fantasy were forged in the Twilight Forge Studios (the bands own studio) and will be unthered upon the metal masses via the almighty Nuclear Blast on 16th August 2019. So the call to arms is near my Twilight Kingdom brethren, so adventurers, knights and wizards; sharpen your weapons, clean up your armour and dust off your spell tomes as we are about to begin our latest journey. Filled with honour, strength, courage and battles we will transverse the Twilight Kingdom with our new companion and lead bard Allyon (new vocalist Alessandro Conti) and onwards we go.

Well if the musical equivalent of Dungeon and Dragons is what quenches your thirst then Twilight Force are the band for you and if you haven’t already been checking them out, then which enchanted realm have you been lost in for the last five years? As true to fantasy power metal the music gallops along like our heroes amount a pegasus steed, awaiting the guitar solos to set our mythical pegasus soaring above the the enchanted Twilight Kingdom!

The drums are the driving force and the keyboards add a bewitching atmosphere to the music, padding out the fantasy metal the rest of the band are fabricating with their chosen (bard) instruments. Before allowing the guitars to be unshackled and let the riffs ascend above the soaring heroes who are bestride their mighty Pegasus companions.

A slight downfall is that sometimes the keyboards can be to powerful for their own sake and put the rest of the bards in peril of being neglected in the regaling of the mighty fables. Alas a predicament many of bards before Twilight Force have encountered, and many in the future will fall foul to this deplorable spell casted by the evil wizards of the realms.

Maybe it is their cunning plan to try and flummox the new companions and curious adventurers new to the realm and throw them off guard and abate the spread of the courage, honour and bravery required to see the quest through to the end of the tale? Who knows of their evil cunning plan and ways?!?! (for example the keyboard work at the beginning  and bridge section of ‘Thundersword’ sound like the theme tune to an 80s cartoon!)

If you already love Power Metal then am sure you will be waiting with baited breath for the release of ‘Dawn Of The Dragonstar’ and if you are an occasional listener to the genre then you will find this release enjoyable. However if you are new to the genre then this release might be a little to much “over the top” sword and sorcery for you, although it could convert you! 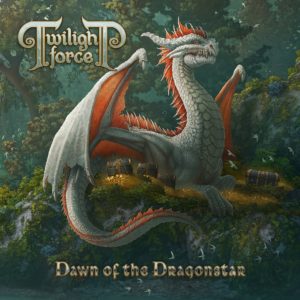 1. Dawn Of The Dragonstar
2. Thundersword
3. Long Live The King
4. With The Light Of A Thousand Suns
5. Winds Of Wisdom
6. Queen Of Eternity
7. Valley Of The Vale
8. Hydra
9. Night Of Winterlight
10. Blade Of Immortal Steel