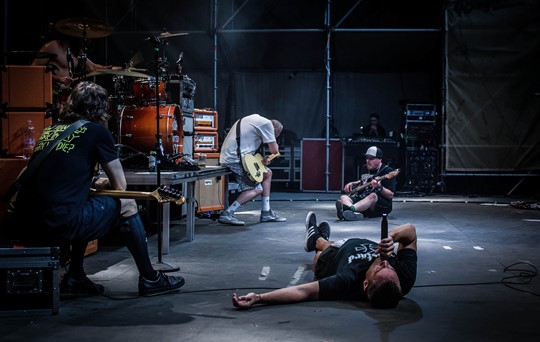 31st July 2021 0 By John Deaux
After a 25-year absence from touring in North America, UGLY KID JOE make their long awaited live return to American soil on September 9, 2021.
As special guests to Judas Priest, UGLY KID JOE will be appearing at the Veterans United Home Loans Amphitheater in Virginia Beach.
UKJ frontman Whitfield Crane comments, “In 1992 Rob Halford came into the studio when we were recording ‘America’s Least Wanted’ and sang on ‘Goddamn Devil’ and blew our fucking minds. As lifelong Priest fans we are stoked to share a stage with the Metal Gods!”
After a 15-year hiatus, UGLY KID JOE reformed in 2012 and have toured extensively throughout Europe and the rest of the world including festival appearances at the likes of Hellfest, Graspop, Download, Sweden Rock and Wacken.
The band released the EP Stairway to Hell in 2012 and the full length Uglier Than They Used Ta Be in 2015. UGLY KID JOE are due to drop their new album in 2022.
For tickets, please visit: https://bit.ly/PriestUKJ.
UGLY KID JOE online:
www.uglykidjoe.net
www.facebook.com/uglykidjoetheband UKJ
www.instagram.com/uglykidjoeofficial
www.twitter.com/uglykidjoeband