Polish death metal legends Vader are very pleased to announce they will be playing another UK show this November at The Rainbow Courtyard, Birmingham.
This new addition will follow a show at The Dome, London the day beforehand. Both shows will be part of Vader’s 10 date ‘Rise Of The Empire’ European tour.
They will be playing alongside Florida death metal mob Hate Eternal and Canada’s syncopated metal machine Threat Signal.

You can purchase tickets here:

14th November – London, The Dome
15th November – The Rainbow Courtyard, Birmingham
Vader will be touring in support of their highly anticipated upcoming album release ‘The Empire’ which is available for pre-order now.

The band recently released a digital double single entitled ‘Prayer To The God Of War’ / ‘Parabellum’. Pre-order ‘The Empire’ via iTunes and get both songs instantly: http://nblast.de/VaderEmpireiTunes here. 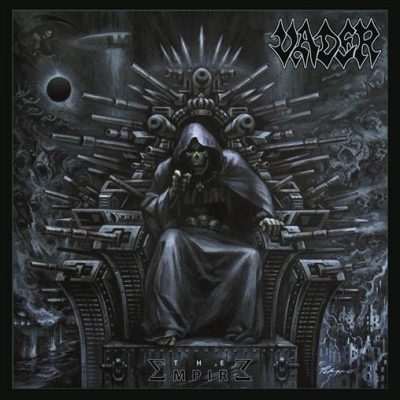 Without doubt, ‘The Empire’ falls under the category of Vader’s classic albums. The impressive monument that they’ve built with their 13th studio album will immediately find its place in metal history. And it will also prove that Vader don’t need to make their peace with the world; they never did, and they certainly don’t now – especially after writing more than 30 years’ worth of death metal history.

The globally conquering weapon was produced, mixed and mastered by Wojtek and Slawek Wiesawski. ‘The Empire’ was completed within the secret bunkers of Hertz Studios in Bialystok, Poland.

Their brand new EP ‘Iron Times’ is available now digitally. You can order it here:  http://goo.gl/iYoO5Z

There is some contention as to the beginnings of Vader, but the truth is that they began in the autumn of 1983 by Piotr ‘Peter’ Wiwczarek (‘Bardast’ and later ‘Behemoth’ back then) playing the bass and the guitarist Zbyszek ‘Vika’ Wroblewski. Extreme metal was about to be born in Poland and Vader were among the pioneers of that genre in the newly emerging underground – and the only band from that era still reigning! The first crucial point in the band’s history was their participation in the first Polish heavy metal festival – Metalmania in 1986, where they played to an audience of around 5000 persons.

Vader recorded their first official material in 1989 in Olsztyn which became the 4-track demo ‘Necrolust’. This was their first studio release that reached beyond the Polish borders and earned them some excellent reviews across the globe. They released the demo ‘Morbid Reich’ in 1990 which eventually gained the status of being one of the bestselling metal demos in history. ‘Morbid Reich’ was also the first release to host Vader’s now infamous logo.