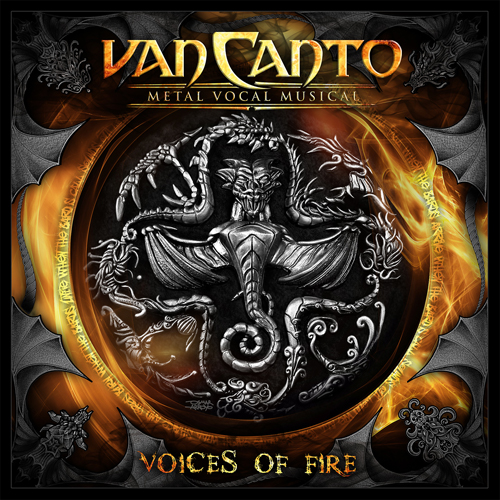 “For this release, the band has teamed up with German bestseller author Christoph Hardebusch who is going to release his new fantasy novel “Feuerstimmen” on March 17th, 2016 on Piper Verlag. “We are barely able to tell what came first: the music as part of the novel or the novel as part of our album. Christoph Hardebusch and we worked hand in hand on this. Our compositions did influence the novel and vice versa. Simply put, we created our own world – a world full of competing kingdoms, epic battles, dragons, fire and bards. Not always deadly serious but full of adventures to set your imagination running wild… like Van Canto does”

So this release sounds like it is going to be fun and maybe a blast. A quick summary for anyone who have never heard of VAN CANTO. VAN CANTO are 5 vocalists and a drummer and are classed as a Cappella band. Two of the vocalists are the lead vocals, while the other three use their voices to imitate guitars and bass. With this release being a concept album and a story of a mystical kingdom, it is the first VAN CANTO album not to feature any cover songs. Also for this release they have got John Rhys-Davis as the narrator, otherwise known as Gimli from Lords of the Ring or Sallah from the Indiana Jones films and countless other movies and TV series! I must admit that I was slightly surprised by this album and did actually thoroughly enjoy it…on the song “Clashing on Armour Plates” the male lead vocalist gets to showcase his talent (as do most of the band) and the drumming keeps everything tight and together and you’ll be singing along to the chorus after just one listen. However where VAN CANTO are at their best is on songs such as “The Betrayal” and “We Are One” which is ‘Power Symphony Metal’…the two lead vocalists steal the show with the female lead stealing the show on numerous occasions, but the male lead just reigns it in before it gets over the top! Also on “The Betrayal” the bass vocalist is just crazy good, makes you forget that its someone’s vocal chords and not a bass guitar!!! While the drummer, especially on “We Are One” and “The Betrayal” shows just how good he is and could easily walk into any power metal band. 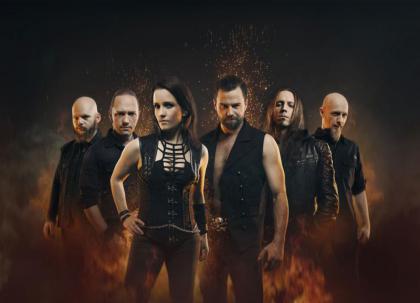 However ‘Voices of Fire’ does have its downside and that’s when they try songs like “Time & Time Again” which sounds like a cappella industrial & Soft Rock band decided to join forces and release a song (it is that random and bad, it just seems out-of-place on the album) or when they stray too far from the power/symphony metal formula that works so well for them. You don’t have to listen to this album in order (although) it does help with the story, some of the tracks could be stand alone. However I just don’t think this album has staying power…you will listen to it numerous times on first purchase and get a soft spot for it, however I can’t see you going back to this release in a couple of months, let alone years! So want something different, quirky and powerful for a short time? Then you could do a lot worse than this release…
Track List

SONGS TO DOWNLOAD – Clashing On Armour Plates”, “Battleday’s Dream” “The Betrayal” and “We Are One”