White Empress – Rise of the Empress

Well, Cradle of Filth fans, here’s something new to sink your fangs into…

Paul Allender, long-time guitarist of the above mentioned, is back with a new band under the moniker, White Empress. Their first official release on Peaceville, Rise of the Empress, shares much from Paul Allender’s Cradled past. While musically reminiscent of COF, it is definitely no carbon copy, and to be quite honest, Cradle could take a lesson from White Empress’ first release.

… to be quite honest, Cradle could take a lesson from White Empress’ first release.Thomas Haywood Jr

Rise of the Empress is well put together with loads of orchestration, a cutting guitar tone, and Mary Zimmer’s dual vocal assault spanning from the gnarliest of the gnarly to mystical and serene. The first few songs on the album made for quite an enjoyable listen, but as the album continued, it became much of the same old drivel.

All the songs begin to lump into one another, melding into one giant song while losing their individual identities. Mary Zimmer has quite the impressive voice whilst singing clean creating a very unique mixture of styles – (I would actually prefer to hear more of this). Mary’s screams, however, tend to fall short sounding over-processed and saturated with effects.

All in all, Rise of the Empress is a fairly strong first release and fans of the genre will embrace it whole-heartedly. I can honestly say I enjoyed White Empress much more than any Cradle of Filth release in the last 15 years. It sounds like Paul has been rejuvenated with his new project and look forward to hearing the bands progression in the future. 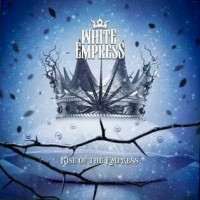 1. Rise Of The Empress
2. The Congregation
3. A Prisoner Unleashed
4. Darkness Encroaching
5. Sven’s Tower
6. Erased And Rewritten
7. The Ecstatic And The Sorrow
8. Dethroned
9. Obsession With The Empress
10. Ours To Burn