White Void is the new brainchild of Lars Are Nedland (Borknagar, Solefald) who comments as follows, 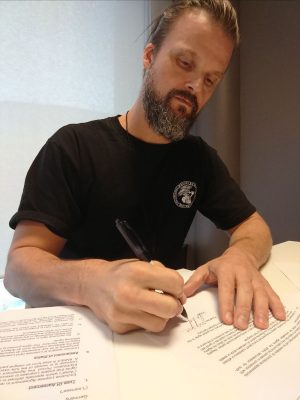 “Life is absurd, which means that sometimes strange coincidences occur. Like the fact that the paths of White Void and Nuclear Blast crossed at the perfect time within the strange year that is 2020. I’m stoked to be working with the world’s biggest and most renowned hard rock and metal label on getting White Void into the ears and minds of music lovers all around the globe, and I’m confident that this will be a prolific endeavor for everyone involved. We have some pretty special tricks up our sleeves when it comes to this whole enterprise, so step over the event horizon and get drawn into the Void. You’re in for a ride!”

Jens Prueter, Head of A&R for Nuclear Blast Europe adds, “Lars Nedland has always surprised me ever since he formed Solefald and joined Borknagar a few years later. A free musical mind with a great sense of songwriting. I was even more surprised when I heard the first White Void mixes. I didn’t expect a modern version of Blue Öyster Cult with a twist of New Model Army – combined with Albert Camus’ philosophy of absurdism. In case that sounds a bit too heavy, we could also joke about Douglas Adams’ Answer to the Ultimate Question of Life, The Universe, and Everything: is 42. Very happy to join Lars and his bandmates on their journey through the void. A void that is perfectly filled with some of the best songs I have heard this year”

White Void is absence of direction and sense in life. It’s a description of the fundamental disharmony between the individual’s search for meaning and the meaninglessness of the universe.

Eclectic hard rockers White Void are a curious bunch. Forged in the space between the occult rock of the seventies, the no-excuses-hard rock of the eighties and the British New Wave movement, they balance on the event horizon that separates old from new. Aggression from melody. Dream from drive.

Add to that the fact that the bandmembers of White Void have their backgrounds in Norwegian black metal, chiptune electronica, pop music and blues, and you’ll see why Anti is an album that’s hard to pin down. It’s darkly melodic, it’s driven, and it’s infused with earworms, hooks and licks. Boasting a shameless attitude, though, it comes forth as deeply true to the core of our shared hard rock heritage.

Still, Anti probably doesn’t sound like you think. It’s an album riddled with contrasts and references, musically as well as philosophically. The concept is based on Albert Camus’ Absurdism and deals with how you cope with an existence that is in its core absurd. Musically it draws on the past while forging towards the future. And the result? Well, enter the Void to find out!