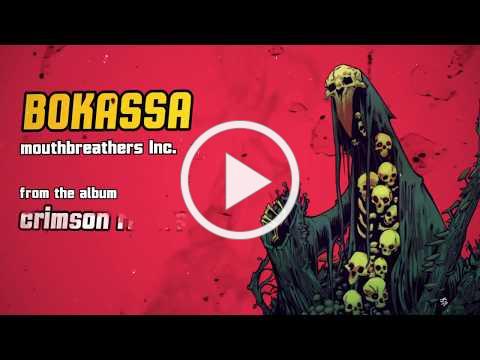 Rollicking first single ‘Mouthbreathers Inc.’ is available right now at: https://ada.lnk.to/bokassa. When asked about the song, the band explain, “‘Mouthbreathers Inc.’ is written from the perspective of a dictator/cult leader when everything starts going south – which it inevitably always does. The track makes for classic BOKASSA with a pummelling lead riff, angry vocals, breakdowns, and a hooky chorus to sing along to while the throne crumbles. Watch out for the sneaky saxophone lick!”
In early 2018, Metallica drummer Lars Ulrich played BOKASSA on his radio show, ‘It’s Electric’, calling them “insanely fucking cool” and his “favourite new band”. Fast forward to 2019, and BOKASSA are set to hit the road with Metallica this summer, declaring, “We are extremely excited to support the legendary Metallica alongside Ghost – over 25 concerts in Europe. We are an underground rock band from Norway, so I don’t think we can even imagine how big and awesome this is going to be, but we are insanely excited for this opportunity!”
Catch the band at the following dates:

Matt Pearce & The Mutiny premiere their video for ‘Scarecrowing’