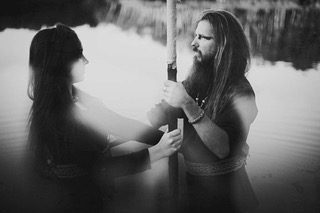 “Wurdiz”, the proto-germanic word for destiny, is all about the dance between fate and free will and with these songs, Sowulo’s founder and multi-instrumentalist Faber Horbach intentionally connects to fate and let it incite him to become a weaver of his own destiny.

The album is about fate as the unfolding turning of events and the journey of becoming aware of one’s own threads within the tapestry of life. As the twelve songs unfold, the replicas of historical instruments in combination with modern-day instruments and production techniques confer to “Wurdiz” a powerful and cinematic sound that takes you on a journey within. While the carnyx, lyre, nyckelharpa, Irish bouzouki, Celtic harp, and blow horns create echoes from the distant past; throat singing, spoken incantations and powerful vocals tell the stories on a deep emotional level, accompanied by bombastic percussion and strings.

”Life, or our reality, can be seen as an unfolding tapestry formed by all kinds of different threads that interact with each other. All the threads are interlinked, holding each other in place. The unfolding reality which takes form in ‘the loom of life’ is based on the interplay between your agency and your fate. Are you aware which thread you are in the bigger picture? Are you able to co-create your reality with fate? To recognize your own fate is the first step in consciously embracing your destiny, and so you will become who you truly are.”

The album will be available as CD Digipack Trifold w/ 16-pages booklet, regular Black, and Limited Grey 2×12’’ vinyl in Gatefold featuring printed inner sleeves and etched D-side, and digital. All formats are available for pre-order in the By Norse Music stores:

Sowulo is formed by multi-instrumentalist, composer and producer Faber Horbach. Captivated by the cyclical nature of existence and an animistic worldview, Faber is determined to express his spiritual path through his music.

Creating melancholic and powerful songs full of spirit and depth is the essence of Sowulo. With lyrics in Anglo Saxon language and music created with (early) medieval and contemporary instruments, the creator and listener are challenged to go on an inner journey and to invoke archetypical wisdom.

Sowulo, Sowilu, Sowilo, Sol or Sigel, is the name of the rune-s and means ‘Sun’ on a symbolic level. Cycles can be found in every individual song up to the entire discography, it follows our interaction with the Sun and tells the storie of our inner and outer cycles of day and night, the four seasons, birth and death.

Since 2013 Sowulo released three completely different concept albums: “Alvenrad” (2013): an instrumental ode to the pagan year feasts; “SOL” (2016): a recomposed and reinvented acoustic version of the debut album and “MANN” (2019): an expression of the four seasons within through the four archetypes: King, Lover, Warrior and Magician. “SOL” and “MA amassed over 2 Mio streams! 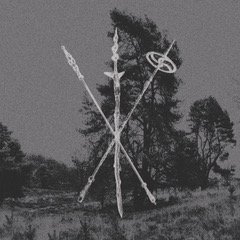 “Wyrd Webba” is the first single taken from Sowulo’s upcoming album Wurdiz. A symbolic poem empowering the listener to become a Weaver of their own fate, the song is fueled by Irish Bouzouki, Nyckelharpa, Blow horns, Celtic harp, violin, viola, cello, percussion and deep, expressive vocals. Its composition is designed to feel the unavoidable force of fate. It gives voice to the call to fulfill your destiny within this lifetime.

Sowulo comments: “Life, or our reality, can be seen as an unfolding tapestry in real time, formed by all kinds of different threads that interact with each other. All the threads are interlinked, holding each other in place. The unfolding reality which takes form in ‘the loom of life’ is based on the interplay between your agency and your fate. Are you aware which thread you are in the bigger picture? Are you able to co-create your reality with fate?’’