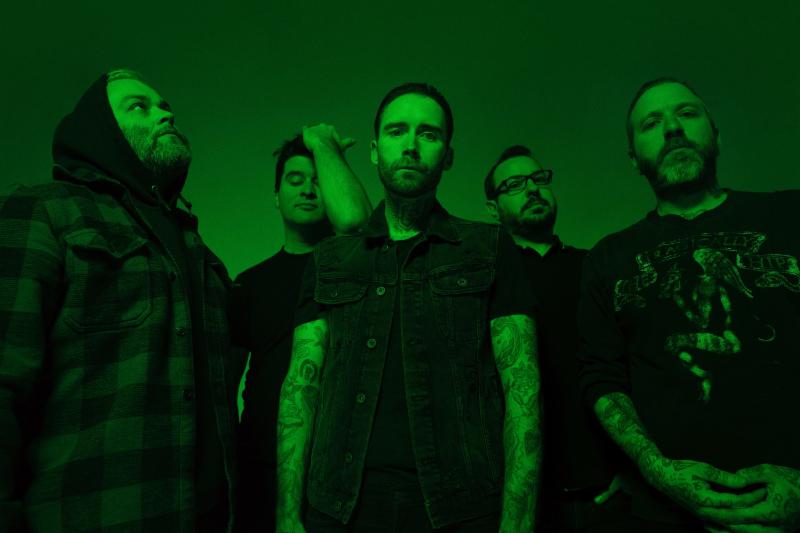 15th February 2019 0 By John Deaux
Iconic rock band ALEXISONFIREdebuted a brand new song, “Familiar Drugs” today. Produced by AOF’s long-time friend Karl Bareham (City and Colour) and mixed by Grammy-award winning Jacquire King (Tom Waits, Kings of Leon, Modest Mouse), the impassioned banger marks the first time the band has released new music as Alexisonfire in almost 10 years.
A special vinyl pressing is available for pre-order today as a single-sided 7” vinyl with a laser-etched b-side. A limited edition glow-in-the-dark variant will be randomly inserted throughout the entire pressing of black vinyl stock. Along with the 7”, AOF will have new “Familiar Drugs” inspired merchandise on their official storefront HERE.
Stream “Familiar Drugs” nowHERE.
Alexisonfire also announced four special headline shows this June in London, New York, Los Angeles, and Toronto. Tickets for all show dates go on sale Friday 22nd February at 10am (local time). Fans can sign up to the band’s mailing list to receive a password for the artist pre-sale HERE. The Alexisonfire pre-sale will be live Tuesday 19th February at 10am (local time). $1/£1 from each ticket sold (for all shows) will be donated to Indspire, a Canadian-based Indigenous-led registered charity that invests in the education of Indigenous people for the long term benefit of these individuals, their families and communities.
Dates include:
Sat 1st June – London @ Alexandra Palace
Sat 8th June – New York @ Terminal 5
Thu 13th June – Los Angeles @ The Wiltern
Sat 15th June – Toronto @ The Budweiser Stage
TUNE INto the band’s Facebook page tonight for a special live stream performance from the House of Strombo in Toronto. Alexisonfire will perform “Familiar Drugs” for the first time plus selections from their award-winning catalogue.
The event will stream live starting at 8PM EST (1AM in the UK) tonight at:https://www.facebook.com/AOFofficial/.
Talking about the new track, vocalist George Pettit explains, “‘Familiar Drugs’ is about recognising you need to make a change in your life, being presented with the opportunity to make that change, and then choosing to do the same thing you always do. It’s about something very specific to me but it can be taken literally or interpreted in any number of ways. Most people have something in their lives they can’t quit, substances, unhealthy relationships, lethargy, self righteousness, a job they hate. ‘Familiar Drugs’ is about choosing comfort over self betterment.”
Hailing from St. Catharines, Alexisonfire rose up out of the Southern Ontario underground in late 2001, to become one of the most successful indie bands out of Canada. The band’s success also reached far beyond Canada’s borders. AOF released four hugely successful studio albums, Alexisonfire (2002), Watch Out (2004), Crisis (2006), and Old Crows / Young Cardinals (2009). Crisis debuted at #1 on the Top 200 Soundscan chart (Canada), and Old Crows / Young Cardinals debuted at #2, and charted at #9 on the US Billboard Independent Album chart. All four albums achieved Platinum certification in Canada and the band took home a coveted JUNO Award. They also graced multiple music magazine covers internationally (Kerrang!, Blunt, Big Cheese, Canadian Musician, Exclaim! to name but some). AOF’s sold-out 10th Year Anniversary Farewell tour in December 2012 touched down on four continents in jam-packed 24 days, illustrating how meaningful the band still is to their legion of fans around the world.
“…it wasn’t until Alexisonfire proved themselves to be masters of the form a decade or so ago that the trail was blazed for countless bands…” – Kerrang!
“With songs that balance singing, screaming, frenetic pacing, and monster dynamics, Alexisonfire have earned their place among screamo’s elite.” – Revolver
“…utterly and undeniably compelling…”- Metal Hammer
“The band’s on-stage chemistry was undeniable, making their single hour stay seem all too short.” – Exclaim!
“The step up to end all step ups.” – Rock Sound
“Alexisonfire are still one of the best live hardcore bands anywhere in the world.” – Beat Magazine

INDSPIRE
Indspire is a national Indigenous charity that invests in the education of Indigenous people for the long-term benefit of these individuals, their families and communities, and Canada. Indspire’s vision is to enrich Canada through Indigenous education and by inspiring achievement. In partnership with Indigenous, private and public sector stakeholders, Indspire educates, connects and invests in Indigenous people so they will achieve their highest potential.ALEXISONFIRE ONLINE:www.theonlybandever.com