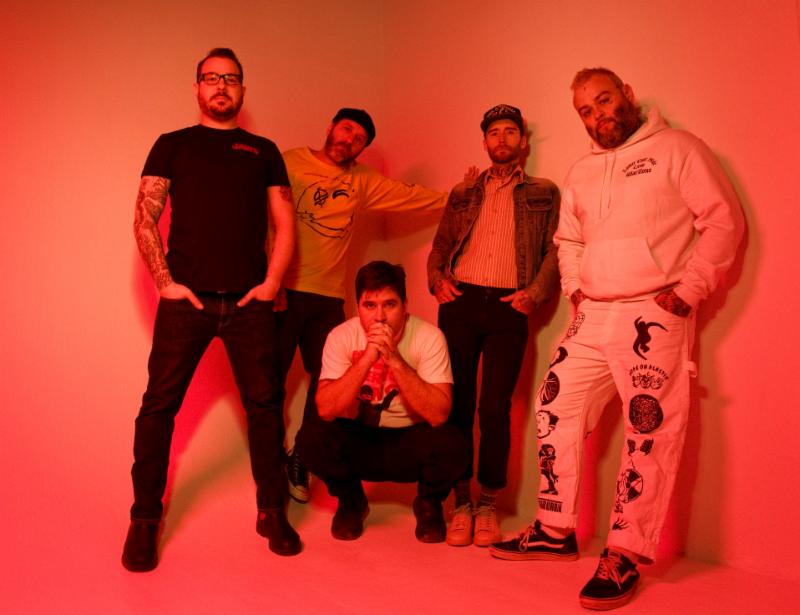 24th May 2019 0 By John Deaux
ALEXISONFIRE unleash a brand new banger, “Complicit” today. Produced by AOF, long-time friend Karl Bareham (City and Colour), and mixed by Grammy-award winning Jacquire King (Tom Waits, Kings of Leon, Modest Mouse), the track comes on the heels of “Familiar Drugs” which marked the first time the band has released new music in almost 10 years.
“Complicit” is now available to stream and purchase via DSPs HERE. Also available is a standard Black 7” vinyl with a limited pressing of a Translucent Red variant randomly inserted throughout stock quantities. Along with the 7” vinyl, AOF will have a new “Complicit” inspired t-shirt designed by graphic artist Jeremy Dean, best known for his “Wonders of Black Flag” designs. Both music and merch can be found HERE.
Says George Pettit about the new track, “‘Complicit’ is about recognizing the unfair advantages that we are afforded as white, heterosexual males. It’s about rejecting regressionist ideas of racism, misogyny and hetero supremacy. It’s about accepting that there is no freedom and no future in a world that is not inclusive.”

Download Red 7” vinyl artwork:http://bit.ly/2WmPfwU
Download Black 7” vinyl artwork: http://bit.ly/2QlxaKb
Download “Complicit” single artwork:http://bit.ly/2WmiMqy
Alexisonfire are set to begin tour next week with shows kicking off in London on June 1 followed by stops in New York, Los Angeles, and Toronto. Joining the band are featured support acts Chastity and Child’s Pose in London, Angel Du$t and Drug Church in New York City and Drug Church and The Dirty Nil in Los Angeles. In Toronto, Glassjaw and The Dirty Nil will perform the first night at Budweiser Stage, with Quicksand and Moneen filling in as support for the second night.
In the words of George Pettit, “These are all bands we know and respect, and think are rad. Make sure you come early!” See below for ticket links.
Alexisonfire premiered the official video for “Familiar Drugs” last month,teaming up with Michael Maxxis who directed their personal favourite AOF video for “The Northern” and City and Colour’s “Fragile Bird”, “Thirst”, and “Lover Come Back”. Watch + share “Familiar Drugs” HERE. The band recently put on a spirited performance and gave an in-depth, candid interview at House of Strombo which is now available. Watch the House of Strombo performance HERE and the full interview HERE.
ALEXISONFIRE 2019 SHOW DATES
June 1 – London, UK @ Alexandra Palace – TICKETS
w/Chastity and Child’s Pose
June 7 – New York, NY @ Terminal 5 – TICKETS
w/Angel Du$t
June 8 – New York, NY @ Terminal 5 (SOLD-OUT)
w/Drug Church
June 12 – Los Angeles, CA @ The Wiltern – TICKETS
w/Drug Church
June 13 – Los Angeles, CA @ The Wiltern (SOLD-OUT)
w/The Dirty Nil
June 15 – Toronto, ON @ Budweiser Stage (SOLD-OUT)
w/Glassjaw and The Dirty Nil
June 16 – Toronto, ON @ Budweiser Stage – TICKETS
w/Quicksand and Moneen
July 12 – Ottawa, ON @ RBC Bluesfest – Lebreton Flats TICKETS
Tour Admat:http://bit.ly/2DePEXC
Alexisonfire has partnered with PLUS1 so that $1/£11 from every ticket sold will be donated to Indspire to build a brighter future for Indigenous students. See below for details on all show dates. To purchase tickets for the remaining upcoming shows, visit theonlybandever.com.