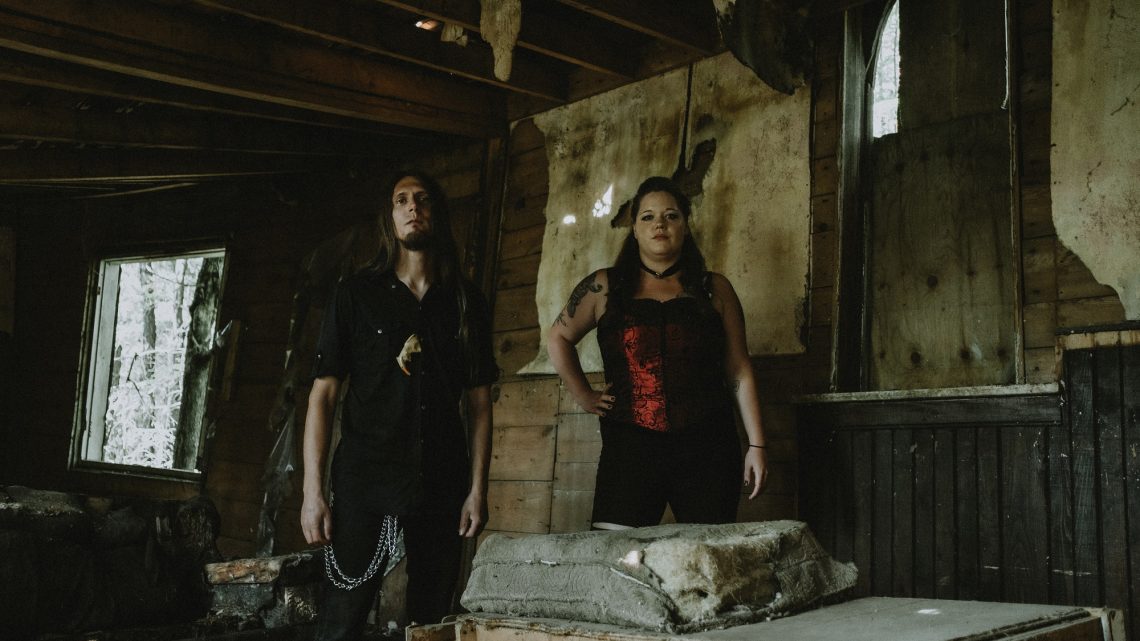 Alyssa Broere of Within Nostalgia Shows AATR Her Snake

Within Nostalgia classify themselves as a bleak heavy metal band from Ontario and this two piece have just released their new album Void & Decay via Bandcamp. We caught up with Alyssa Broere to get the lowdown on their pets at home. 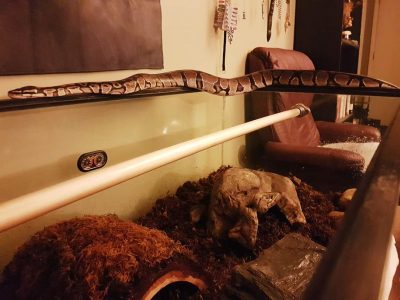 We have three pets: two cats and a snake. Nikki is an orange tabby and by far our oldest pet at age 16. She was my old friend/ bandmates cat who had passed away so she already had her name. It was either we took her in or she would be put down so I’m glad we could give her more years! We have had her almost 6 years.

Pat is an 8 year old white domesticated shorthair with orange patches and we adopted him about a year ago. We kept the name because it suited him. Madusa is a ball python who is about 11 years old. I got her when she was 6 months old so I’ve had the pleasure of watching her grow all of these years.

What is the weirdest thing any of your animals have done? 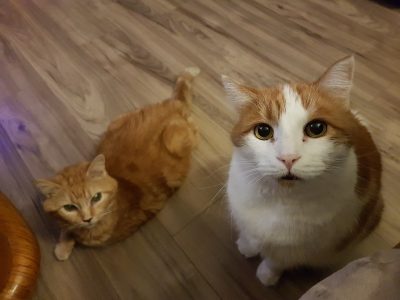 The weirdest thing I’ve seen my cat Pat do, which he does regularly is while he’s cleaning his ears he flips them inside out and leaves it like that for a bit. I’m not sure if he realizes it’s inside out or not. I will also sometimes take baths with Madusa.

Are you currently teaching your pets new tricks?

Every time I give the cats treats I throw them up in the air for Pat to see if he can catch them. He has only caught one so far but he’s still in training.

This past year has been pretty manic, so you’ve no-doubt, how have your pets helped you with being stuck at home during the Covid pandemic?

Back in March, at the beginning of the pandemic I was laid off of my full time job for 7 months and had spent a lot of time with the animals. They are great companions, even if they’re just sitting there. Pat would sometimes meow relentlessly while I would try to nap on the couch, which was really annoying but thankfully he hasn’t done that for a while.

I’ve always had a passion for animals but for some reason have become more of a crazy cat lady in the last several years. Reptiles are very interesting to me and if I had more room to have more of them I totally would. One day I’d like to own a frog.

Unfortunately my cats don’t have battle vests but we have dressed them up for Halloween and Christmas. For Halloween, Pat had bat wings and Nikki had a lion costume. We also got her a little pumpkin dress. For Christmas, we got them festive sweaters which Pat hated but Nikki didn’t mind so we kept it on her for a while.

They don’t seem to mind when we practice at all. Pat gets curious more than anything, coming into the music room and meowing while we are playing and I find they are very relaxed when we play acoustic guitar. I actually recorded Pats various meows one time and put it into a joke song we recorded with a friend. He’s quite the vocalist.

We usually get someone who lives in the building or a friend to look after the cats if we’re gone for more than a couple of days. The snake is pretty low maintenance so she rarely needs any looking after while we are gone.

Speaking of practicing, any new music in the pipeline? IF so when is it due and what can your audience expect?

We have just released our new album ‘Void & Decay’ December 18th 2020 so we have been trying to promote that as much as possible before moving on to anything new. We have both been writing but more so for other side projects and just experimenting with different genres for the time being.

We would like to sincerely thank everyone who has supported us through this journey, and hope that everyone is doing well through this strange time we are living in!

Thank you so much for having us for this interview!!