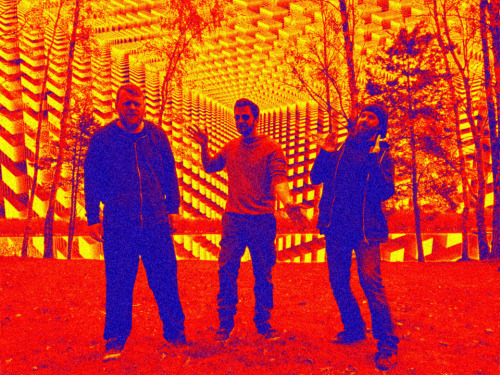 King Bong were bought to this planet to take us on a mystic journey fuelled by improvisational riffs and mythical chaos. Their music is an adventure we are lucky to be a part of. Guitarist/ Synth player Andrea Ferrari took some time out of the trip to talk to us about his fartbox of a cat.

Hey Andrea, at All About The Rock, we consider ourselves pet lovers, which is why we want to know all about yours!

That’s a good thing! Whoever isn’t a pet lover is untrustworthy and a scoundrel to say the least. I am currently playing host and second fiddle to a big, round, orange cat called Viktor, at least theoretically. As T. S. Eliot knew well, cats have a million names, and the most used in the house are “Uauo” – from the weird yells he emits – and many derogatory-yet-endearing terms like “Fartbox” and such. He’s been with us for a year and a half and I’m starting to (lose) hope age will calm him down some.

If you look at it from a detached point of view, talking to your pet, though it’s normal for everyone who has one, is really fucking weird. Especially because you can’t seem to avoid doing it in a weird, squeaky voice. Also, answering his meows with ever shriller meows of your own. It’s a tiny little alien creature jumping around your house, how weirder can it get? 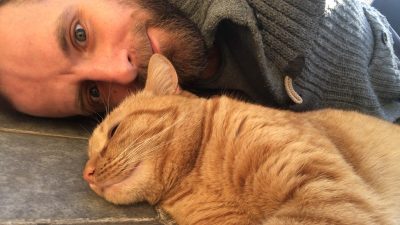 Andrea and Viktor (aka the fartbox)

Well, you would be surprised! What is the best trick he cat can do?

Fun fact: it is possible to teach house cats tricks. The resident beast can sit, shake and give five, if properly prompted with nutrients. Although I have to say, the best trick he pulls is being able to slap me in the face at 6:30 AM asking for food and then being absolutely nowhere to be found.

Hooray! Finally someone that has cats that can do tricks! Well done!

This past year has been pretty manic, so you’ve no-doubt, like the rest of us, spent a lot of time at home. How has Viktor helped being at home for you? Have they been comforting, or have they just been driving you nuts?

Can it be both? I’ve always worked from home even before Shitshow Supreme started, so I’ve had to adjust my schedule and learn to tune out the meowing frequencies in order to not be driven up the walls by the attention-seeking bastard. At the same time, a cat is an endless source of entertainment, because everything they do is just so dumb 90% of the time. Yes, cat, that wall is sure mighty interesting. Mh-hm. Also, once they start to accept you’re occupying the same general space they are, they become used to you and you can do all sorts of dumb things like dancing with them, with barely an annoyed look of superiority on their part.

Always and forever a tree-hugger. When I was little I dreamed of becoming a marine biologist to study my favourite and objectively best animal in the world: Sharks! Sadly, my ears are useless except for telling notes apart, so I had to put that in the drawer. As for different pets, I really wanted to get an octopus to look at but I’m afraid I’d waste all day and finally be consumed by the Cthulhu-like abominations that lurk in the unutterable depths of our oceans, and that’s no fun. Iä! Iä! Cthulhu ftaghn!

No, and I think there should be laws against that. As well as against breeding horrible animals with weird noses to poke fun at, but that’s another can of worms entirely. Cats in Santa hats are pretty cute, but that’s as far as I go.

Who will look after your pet whilst you’re away on tour/holiday?

What is this “tour/holiday” you speak of? Some long-lost tradition of the Ancestors, perhaps? Anyway, luckily my parents are a hop and a skip away from here and one of my neighbours knows his way around cats, so we’re covered on that end.

Does Viktor like it when you practise at home or has he had any influence on your music? Does Viktor seem to prefer any particular genre of music more than another?

The sound of an electric guitar seems to have no effect at all on my cat, which is pretty sad, but then again I’m not really playing anything close to pleasant on the ears when I practice, so good for him I think. Also no, I don’t think the cat has had any influence on what I play or listen to. Maybe if I had a smarter cat, but those are quite rare I’m told.

If anyone reading this has a smart cat,  breed it. The world needs more smart cats (but not with opposable thumbs. That would lead to them world domination)

We never stop writing music! That’s the best part about focusing on improvisation. On the more “serious” side, we’re about to publish an album with a very special guest: Chris Haskett from the Rollins Band! It’s a 4-cd collection of improvisations called OGOPOGO and it’s out this month!

We’re also working on rearranging the tracks from our Sand/Return record to be released as bonus videos, and we just noticed today we’ve been playing them (or some versions thereof) since 2015, which is both very interesting musically and quite fun to go tinkering around with “old” material. 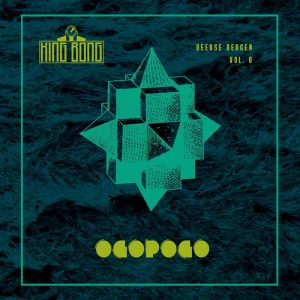 This sounds both fun and promising Andrea!

The owls are not what they seem.

Thank you for your time. It’s been a pleasure as always.

Same for me (and the cat, though he doesn’t know!)