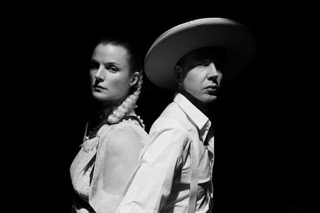 ÅRABROT SHARE SHORT FILM FOR ‘KINKS OF THE HEART’

17th February 2021 0 By John Deaux
Born of the long dark winters of Norway Årabrot was too black for metal and too avant-garde for punk so it forged its own path. Hewn from empty roads and the cold impenetrable depths of the fiords of its home.
A Norwegian Gothic, tales sung and stories told in screams and whispers. With its steel guitar, a steely gaze a sneer and
a Stetson, Årabrot is the bastard offspring of Billie Holiday and Elmore James. It is The Velvet Underground if Johnny Cash was a member and Nico was able to sing. It is Camus, Sartre, Poe and Burroughs cut-up and regurgitated in an unholy erotic mass. It is all the great bands you haven’t even heard of. It is you. It is here it is now and there are other bodies to bury. Årabrot is not fucking around.
Årabrot is Kjetil “Tall Man” Nernes and Karin “Dark Diva” Park. They live in the Swedish countryside with their two children in the old church that they own. Rock’n roll is their religion.
Discussing the new video for ‘Kinks of the Heart’, Kjetil comments,
‘Kinks Of The Heart and Hailstones For Rain is one narrative in two parts. It is the tale of Årabrot, preachers of rock’n roll. The videos are shot in the church where we live and its surroundings, our neighbours and friends as the congregation. Karin is 8 months pregnant. If you want to know what Årabrot is all about this is where you want to start. Brilliantly directed by Thomas Knights and Kassandra Powell of Obscure Film Collective.’
Årabrot’s 9th full-length album Norwegian Gothic sees the band collaborate with Lars Horntveth (Jaga Jazzist), cellist Jo Quail, Tomas Järmyr (Motorpsycho), Anders Møller (Turbonegro, Ulver) and Massimo Pupillo (Zu).
A stellar production by Jaime Gomez Arellano (Black Eyed Peas, Paradise Lost, Hexvessel, Oranssi Pazusu) makes this the quintessential Årabrot record. Commenting on latest single ‘Kinks of the Heart’, Kjetil adds,
‘There is a certain beauty to living in the countryside- there’s clear crisp air, fresh water, splendid sunsets. Every day we see wild animals coming down from the forests that surround us. There is a freedom attached to all that. The other day I went out of the church where we live and found a dead crow on the porch. It was only the head, its eyes gorged out and it had a huge claw stuck in its neck. There is also a brutality to nature which is ever-present out here. It is this duality Cormac McCarthy so masterly puts into words. It is also what Kinks Of The Heart is about.’
While the 20 years history of the band is a story of change and correlation, it would be too simple to
break this creative duality down to the stereotypical dichotomy of the yin and the yang… and if one attempted to do so, it would turn out to be quite difficult to determine which of these forces would be represented by which individual.
A chubby child from a christian family, growing up in a small Swedish village and years spent in a Missionary school in Japan made Karin desperate to break away from narrow thinking. And she used her only advantages to do so; her unique voice and personality. By the age 15 she had moved away from home to find her place in music After studying at Stockholm Music Conservatory, a Norwegian poet took her to Norway where she started her pop career, this was followed by a move to London to write songs, and working as a model.
After five albums, a few Grammy’s, writing a Eurovision entry for Norway and hits for other artists and performances with Lana Del Rey and David Bowie, Karin returned to the village of her youth and bought the church where she first sang in front of an audience as a child. She turned the church into where they rehearse and record, surrounded by pianos, organs and hundreds of old bibles that the church left behind when the congregation stopped.
The clerical environment has proven to be an excellent creative tapestry for a band whose lyrical focus orbits around sex, death and defiance.
Kjetil Nernes was diagnosed with malignant throat cancer in 2014, in the middle of a tour. Instead of heading in for surgery right away, the band finished a full European tour first, “Every night of that tour was like the last show ever“, Nernes comments, “It was really strange. When a doctor calls and says, ‘you’re terribly sick’, it’s surreal. You go into this phase where life is more vivid and more real, in a weird way. We’ve done so many shows through the years and sometimes it’s a little like going to the factory to do a job. But with an axe hanging over your head you perceive the world differently.“
But the axe did not fall, and after successfully recovering from cancer, Årabrot are now stronger than ever.
The band has collaborated with procuders like Billy Anderson and Steve Albini, and musicians like Ted Parsons (Killing Joke/Swans), Sunn O))))’s Stephen O’Malley, and Kvelertak’s Erlend Hjelvik. They have composed music for silent movies like “Die Niebelungen” and “Doctor Caligari”, and have teamed up with The Quietus founder John Doran on his spoken word tour. Their album “The Gospel” was named “Album of the Year” by The Quietus.
Norwegian Gothic is released 9th April (Pelagic Records). Pre-order now: https://bit.ly/arabrotmusic
https://www.facebook.com/ARABROT
http://www.arabrot.com

Interview with Emily Palen a.k.a. KnightressM1