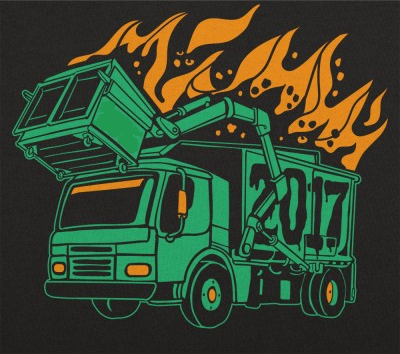 2017 has been a dumpster fire of a year, which may have as a shock to some of us who called out 2016 as a mega dumpster fire last December and hoped 2017 to be a better year. Politics-wise it’s been one hell of a year to say the least. With the current climate of pop culture and politics, we can only guess that 2018 already has it in for us. But, 2017 wasn’t all bad. It’s been an excellent year for metal, in fact. We’ve seen new breath being drawn into the metal scene with new heights of genre mixing, creative malleability, and pure metal domination. So without further ado, here is my Top Five of 2017.

In no particular order(seriously this year was just too good to choose).

This album was a hell of a thing. Chasing the high of In Times, and right on the heels of new keyboardist/clean vocals arrival of Håkon Vinje, Enslaved unleashed a storm of progressive viking pillaging. E is a tour-de-force album and has consistently rated between 8 to 10 out of 10 across the board. It’s brutal, it’s proggy, it’s old, it’s new, it’s fresh and they are preparing us for another twenty years of magnanimous metal reign.

On September 1st, Paradise Lost blessed us with their fifteenth full length album, Medusa. According to the band, Medusa was to be «sludgier and more doom filled than ever before» and boy did they deliver. It’s a soothing balm for doomsters in need of grandeur and gloom. Various critics hadescribed Medusa as a «fine wine», «magnetic», and «immense».

You can’t go anywhere in the metal scene today without seeing a NeO shirt or hearing the name Ne Obliviscarus. The band has situated themselves as a metal house-hold name, especially with the release of Urn which is as new as it is familiar. Urn is sure to remain a fixture of favourite albums throughout the years.

Zeal and Ardor- Devil is Fine

Released March 2017, Zeal and Ardor’s Devil is Fine is a freshman full length that seemed to come out of nowhere, and when it did, it came with a flurry of attitude and immediately positioned the mastermind behind the project, Manuel Gagneaux within the top influential forces in metal. Mixing American Black spiritual music with the classic sound of black metal(known for its controversial preference among white supremacists) and it works. Boy does it work. The two styles mix themselves together so seemlessly and it’s a little more than just a sly smile. Gagneaux gives us a full mouth of bared teeth and an intelligent sense of knowing just what actually is up. He knows his way around a riff, and around a catchy as eff melody. Watch your back and expect more from Zeal and Ardor in the years to come.

My own personal preference for a bonus mention here. This is a gratuitous name drop.

This mixed-genre outfit released their freshman album in 2017 and immediately made waves. They seamlessly and ambitiously mix power metal, symphonic, death, black, cabaret, classical, and whatever else they can get their hands on into their music and create a cinematic sensory onslaught.

2017 to me was a year of youthful ambition and the fine barrel aged taste of maturity and time blended together to put us on the precipice of a new era of metal.

I think it’s safe to say 2018 and even the coming decade have a lot of surprises in store for metal fans and I whole-heartedly look forward to it.

Blair and everyone at All About the Rock