By way of a late Valentines Day gift, BLOODSTOCK is thrilled to announce 3 more bands for 2017’s event!

ARCH ENEMY will be joining us as Sunday’s special guests.  Get a taste of their Swedish melodeath with the live video for ‘War Eternal’, shot at Wacken 2016 and check out what’s in store this August –

.  The band, now fronted by Alissa White-Gluz, are set to release a new live DVD/Blu-Ray of their full Wacken set titled ‘As The Stages Burn!’ on 31st March via Century Media.  ARCH ENEMY guitarist Michael Amott tells us “We’re very much looking forward to being a part of this year’s edition of BLOODSTOCK, which actually takes place very close to where my father was born.  We’ll be bringing our ‘pure fucking metal’ attack home… Hail to England!”  Stay clued up on all things ARCH ENEMY at www.facebook.com/archenemyofficial/.

Bonds’ – .  Frontman Alex Koehler tells us “We are looking forward to heading back overseas this summer to be part of Bloodstock 2017.  When we were offered the show and we saw the lineup we were extremely excited.  We’ve seen tons of videos from BLOODSTOCK in the past and cannot wait to be there.”  Get all the latest on CHELSEA GRIN over at www.facebook.com/ChelseaGrinMetal.

Lastly, prog metallers ONI join the ranks on the Sophie stage on Saturday.  Signed to Metal Blade, these Canadians recently unveiled a creepy video for ‘The Only Cure’ from debut album ‘Ironshore’, featuring guest vocals from Lamb of God’s Randy

Blythe.  .  Frontman Jake Oni says “In the past year, we’ve had the pleasure of playing the UK a few times, but being a part Bloodstock 2017 is a huge honour.  We are not only excited to show this festival what we’ve got, but also to see some of the masters that are playing!!!  You don’t want to miss this!”  ONI warm up for their BLOODSTOCK debut by traversing Europe next month with Children of Bodom.

It’s nearly the ‘last chance saloon’ for the very popular ticket payment scheme!  BLOODSTOCK’s deposit plan helps ease the pain of paying for your standard weekend ticket by breaking it up into five smaller, more manageable sums.  Sign up in the ticket store before 28th Feb with your initial payment of £34.80.  Thereafter, four additional instalments of £27.80 will debit your bank account on 1st April, May, June and July respectively.  Job done, ticket purchased!  Get full info at http://bloodstock.seetickets.com.

If you’re coming to BLOODSTOCK by coach, you might want to secure your spot now to ensure you’re not disappointed.  BIG GREEN COACH have 21 departure cities for coaches directly to BLOODSTOCK in 2017; Birkenhead, Bournemouth, Bristol, Cardiff, Chester, Glasgow, Gloucester, Leeds, Liverpool, London, Manchester, Middlesbrough, Newcastle, Newport, Oxford, Preston, Sheffield, Southampton, Sunderland, Swansea, and Worcester.  BIG GREEN COACH will bring you, all your camping gear, & beer supplies and drop you hassle free right inside the festival grounds.  Check out the details and secure your seat for only a tenner (with the rest payable in July) over at http://www.biggreencoach.co.uk/events/bloodstock-festival-tickets-coach-travel.

BLOODSTOCK will take place at Catton Park, Derbyshire on 10th-13th August 2017.  Standard weekend camping tix are on sale at £139 (plus booking fee), plus limited VIP packages/upgrades and car parking tickets (at a cheaper price than ‘on the day’ purchase) from http://bloodstock.seetickets.com.  Children’s weekend tickets are also available, priced £35 (+ booking fee) and under 4’s go free!  Camper van pitches have now SOLD OUT. 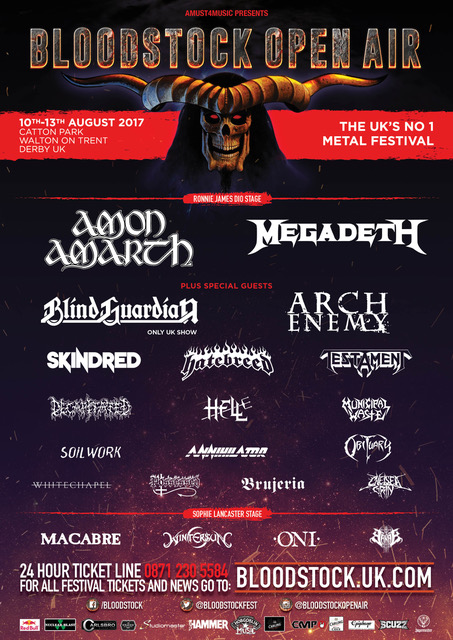