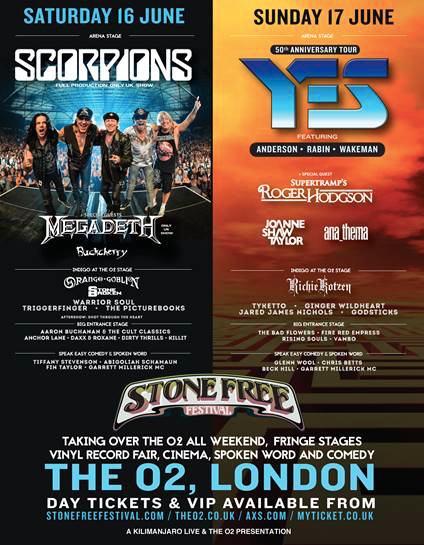 Tuesday 20th March 2018
Kilimanjaro Live and The O2 are proud to announce further additions to the third annual STONE FREE FESTIVAL, which will be happening on Saturday 16th and Sunday 17th June 2018 at The O2, London, headlined by Scorpions and YES feat. ARW in the main arena.

Joining British stoner rock icons Orange Goblin and fast-rising British rock band Stone Broken in Indigo at The O2 on Saturday will be New York City rockers Warrior Soul, who with their mix of hard rock, punk and metal will be setting the stage alight alongside Belgian blues-rockers Triggerfinger and German heavy-rock biker-duo The Picturebooks.

Now added to the Big Entrance Stage will be KilliT who are born from bands such as King Lizard and Ace Mafia which also featured current members of Judas Priest and We Are Harlot. With their sublime guitars and powerhouse vocals, they will be welcoming festival goers with a bang alongside British hard-rock bands Daxx & Roxane, Dirty Thrills, Anchor Lane and Aaron Buchanan & The Cult Classics.

Headlining The Speakeasy Lounge on Saturday will be stand-up comedian Tiffany Stevenson, who has appeared on TV shows Mock the Week and 8 Out of 10 Cats. Her show ‘Mad Man’ was also a huge hit and one of the most reviewed shows at the Edinburgh Fringe in 2015.

Returning to STONE FREE FESTIVAL on the Sunday is Jared James Nichols. With his hair-raising and raucous blues playing, he’ll be tearing up the Indigo at The O2 alongside Richie Kotzen, Tyketto and Ginger.

About his return to the festival, Nichols comments, “It’s an absolute honor to be asked back to Stone Free this summer. Playing on the same bill as Richie Kotzen and Joanne Shaw Taylor, who I both admire so much, and of course our good friends The Bad Flowers. Not to mention YES (feat. ARW)!!!  We are gonna bring the Blues power in triple overdrive!!”

Opening proceedings at the Indigo at The O2 will be Cardiff’s Godsticks, with their hard-hitting progressive rock, which Prog Magazine hailed as “a winning blend of channelled aggression and emotional depth, combining lyrical intelligence and instrumental fireworks”.