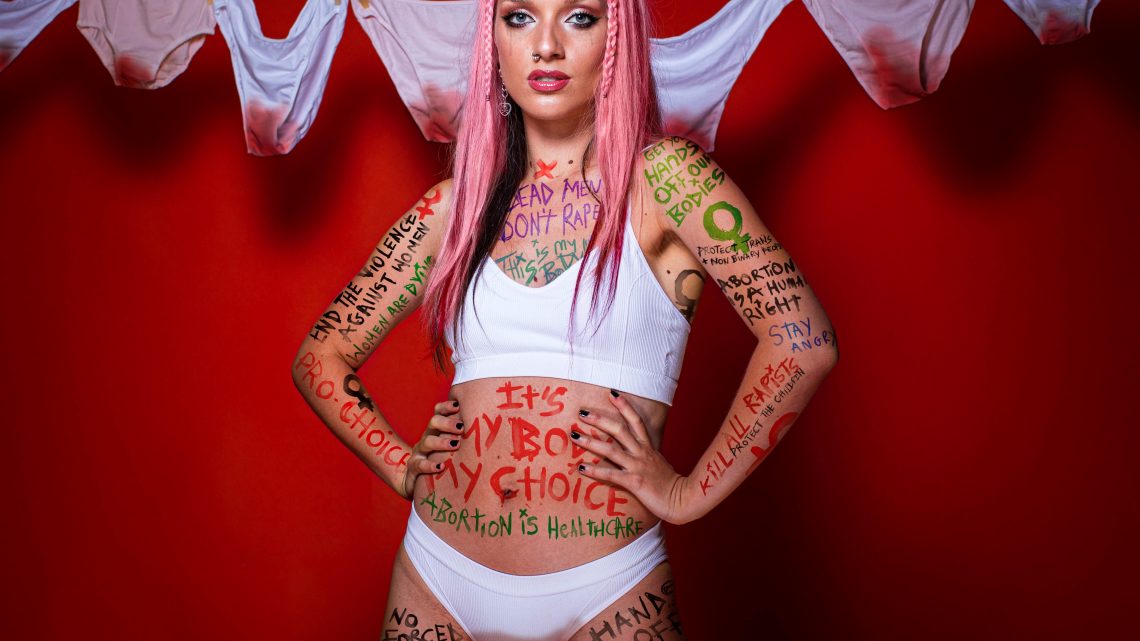 “After Roe vs Wade was overturned in the USA, I saw the very real aftermath on social media. So many women feeling completely helpless knowing their human right to bodily autonomy had been stripped from them. It made me think of how the system was failing women and those with uterus’ so badly, especially with such high cases of rape and the majority of those cases not resulting in convictions. Not only are the victims being punished in a system that’s meant to protect them, the punishment of illegal abortion in many countries is worse than that of actual rapists. It’s heartbreaking to see cases of women and girls killing their rapists in self-defence and spending their life behind bars because the system would not protect them. I wrote, mixed and produced this song in three days after being so deeply hurt by everything that’s happening right now.” DELILAH BON, JULY 2022

DELILAH BON (the alter-ego of Lauren Tate from Hands Off Gretel) is angry, like countless others throughout the world, following the recent news coming from the US that sees more women and those with uterus’ lose their rights to legal abortion and bodily autonomy. While many of us recoil at the injustice and the horror in silence, Delilah speaks out with an eloquence and a fury.

Built on the firm foundations of female empowerment, Dead Men Don’t Rape fuses hip-hop, punk and nu-metal with a ferocious, screamed rap over razor-wire guitar riffs. “My body is mine / Don’t belong to the government,” Bon screams, commanding full attention. You can almost taste the hurt, the betrayal, the anger.

Dead Men Don’t Rape is a song that addresses a system that is failing to protect victims of abuse. With a rise both in violence towards women and worldwide femicide, Delilah is prepared to be a voice for those that do not have one. There are some things that need saying out loud, and sometimes it takes a courageous young woman to say them.

Following her acclaimed debut self-titled album, Delilah previously announced her first UK tour for the autumn of this year, which follows festival appearances at Kendal Calling, Maui Waui, Shambala and Burn It Down, and precedes her appearance at Drown U Out festival alongside the likes of SCARLXRD, ZAND, Bob Vylan, DANA DENTATA and GHØSTKID. Headline dates as follows: 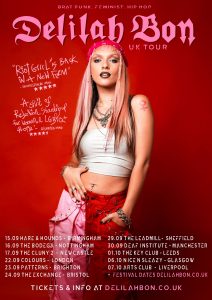 “The Delilah Bon persona unleashes a whole new level of clever, sarcastic, empathetic, and righteously angry lyrics, offering help to those that need it and a firm middle finger to the rest. The living embodiment of the DIY attitude. As Huggy Bear yelled back in the 90s ‘this is happening without your permission’ …” LOUDER THAN WAR

“We could have dedicated part of this review to all the topics and facets of feminism Delilah tackles on her record but, honestly, what’s the point? We’ll never do it as powerfully as she does, so instead, here’s an instruction: PUT THE ALBUM ON! And know it was made by a boss babe who literally made everything you can see and hear, and know that you’re just as much of a boss babe as she is …” BITTERSWEET PRESS