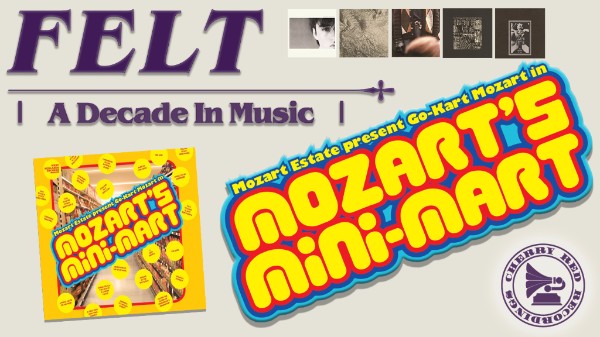 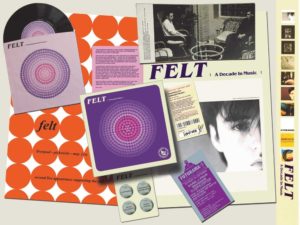 Anyone who’s been living on the grapevine these past few years must have heard the rumours about the coming of the FELT reissues – well they’re here.
During the ‘80s Felt made ten albums and ten singles for the Cherry Red and Creation labels. This beautifully produced series examines the work of one of the greatest underground groups of modern times.

The first five albums will be released on 23rd February 2018. These vinyl records, unavailable for many years, have been remastered and revisited by Lawrence, and he has fashioned the ultimate definitive collections. They are available in a deluxe gatefold sleeve. The CD version comes in a bespoke 7” box, complete with various ephemera consisting of; the original album in a special gatefold sleeve – long deleted 7” vinyl single pertaining to the relevant year of release – reproduction gig flyers – double sided wall poster – and four button lapel badges for wearing with pride!

Crumbling The Antiseptic Beauty
Lawrence’s ambition was to release the best debut English album ever! Adrian Borland offered his services, then commitments with his band The Sound prevented this from happening. So Felt began a relationship with Swell Maps producer John A. Rivers. Recorded and mixed in six days the band got a taste of how bitter reality fares compared to the “mellow fruitfulness” of blind ambition.

The Splendour Of Fear
Lawrence escapes the contours of a bland city and retreats into his mind. Felt had risen from the underworld searching for a new horizon but only managed to slip into a desolate obscurity! Dark black slabs of creosote guitar – vast swathes of epic interplay – casting futuristic Shadows – an idiosyncratic and unobtrusively brilliant band, the music Felt made on this album is unlike anything attempted before. This really is a template for an age yet to come. And it pays to know that Maurice Deebank now resides in a monastery in Birmingham!

The Strange Idols Pattern And Other Short Stories
Before the Stone Roses and after Be-Bop Deluxe and Plastic Ono Band, John Leckie worked with Felt. Booked into a metal/reggae studio in Birmingham’s industrial wasteland he sculpted a Michelangelo slice of new rock – exquisite and beautiful guitar odysseys – quite unlike anything the city had experienced before. Merging pop with a classical nuance Felt stood alone as the forerunners of a brand new style. And Gary Ainge was finally allowed to use his high-hat!

Ignite The Seven Cannons
Produced by Robin Guthrie of Cocteau Twins and featuring the skyscraping vocal of Elizabeth Fraser on the mighty Primitive Painters. Felt found themselves at the top of the independent charts. Unhappy with the overall sound though – it was as if some of Lawrence’s best songs were lost in an “ethereal swirl.” John A. Rivers has been given access to the original master tapes and six songs have been remixed. Also – side 2 has been focused, edited and “made symmetrical.” Finally these songs can be heard as intended by Felt. It has become at long last a cohesive whole.

The Seventeenth Century
Retitled The Seventeenth Century – the original name for the album was changed late in the day. This reversal of misfortune was classed as an awful mistake and Lawrence’s biggest regret. Flash forward to now and this situation can finally be rectified. “You can’t change the title of an album” – they told him – so he said; “if Kraftwerk can and Bowie can then I can too!!”

With these albums Lawrence should at last be able to step up and take his rightful place amongst the high priests of attitude and cool. 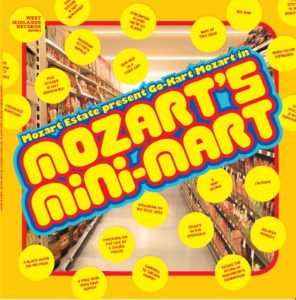 People of the past were known to use that most notable phrase: ‘to blow your mind’ – I think it is time to scatter the dust off this old expression and to reinstate it because I can think of no better epithet to describe the effect these songs will have on the discerning listener other than to say they will positively ‘blow your mind’!!

It is rare to find an album on which you enjoy every song and play both sides about equally – I believe Lawrence has come up with one – Mozart’s Mini Mart is that album!

There are 17 tracks featuring songs such as When You’re Depressed – which states ever so matter of factly: ‘when you’re depressed – you’re depressed’! This song also has a video which you might want to watch! Also included is Relative Poverty: ‘I’m living on a tenner a day’ – Facing The Scorn Of Tomorrow’s Generation or how about? Knickers On The Line By 3 Chord Fraud.

On this record Lawrence adopts the persona of ‘the sardonic Lucifer,’ a devilish character who pin-pricks his way through a myriad of absurd scenarios while dragging a bin-bag of pomposity and injustice to the council tip of songdom!!!

All this is done with the usual Mozart tongue in cheek witticisms – it’s as if Orton met Coward on the way to the kitchen sink.

This really is the most commercial set of songs Lawrence has ever released and it is definitely, absolutely the top most pop album of the year. It can’t be topped and it won’t be stopped!

You will treasure this and play it often.

Anagram Of We Sold Apes
When You’re Depressed
Relative Poverty
Zelda’s In The Spotlight
Big Ship
Nub-End In A Coke Can
A Black Hood On His Head
Facing The Scorn Of Tomorrow’s Generation
A New World
I’m Dope
Crokadile Rokstarz
Knickers On The Line By 3 Chord Fraud
Chromium-Plated We’re So Elated
Man Of Two Sides
Farewell To Tarzan Harvey
A Ding Ding Ding Ding Dong!!
Anagram 1st Prize Reprize

EPICA announce supports for their ‘The United Principle’ 2018 UK Tour!